The Dreadful Hours (album) by My Dying Bride 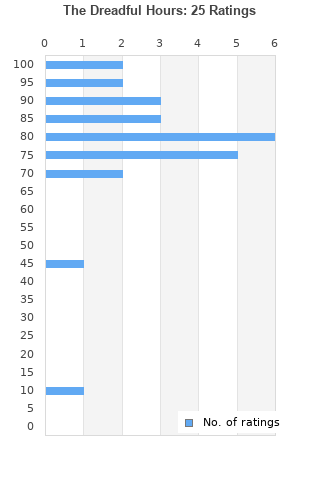 The Dreadful Hours is ranked 3rd best out of 15 albums by My Dying Bride on BestEverAlbums.com.

The best album by My Dying Bride is The Angel And The Dark River which is ranked number 6124 in the list of all-time albums with a total rank score of 203. 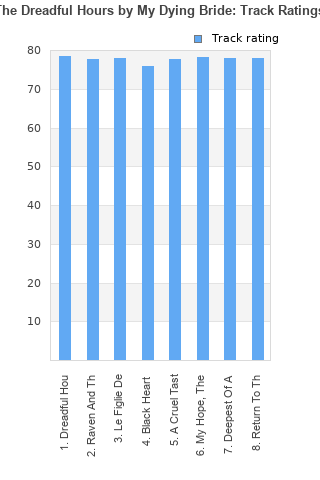 Rating metrics: Outliers can be removed when calculating a mean average to dampen the effects of ratings outside the normal distribution. This figure is provided as the trimmed mean. A high standard deviation can be legitimate, but can sometimes indicate 'gaming' is occurring. Consider a simplified example* of an item receiving ratings of 100, 50, & 0. The mean average rating would be 50. However, ratings of 55, 50 & 45 could also result in the same average. The second average might be more trusted because there is more consensus around a particular rating (a lower deviation).
(*In practice, some albums can have several thousand ratings)
This album is rated in the top 1% of all albums on BestEverAlbums.com. This album has a mean average rating of 81.0/100. The trimmed mean (excluding outliers) is 84.5/100. The standard deviation for this album is 17.6.

A couple years ago I was on blowing through a lot of gothic metal just to check it out. Most of the artists I tried were good, but they didn't satisfy my need for something that stood out. My Dying Bride has stood out for me several times because their take on gothic metal sounds so real, much more real than bands who do gothic music for the hell of it. The Dreadful Hours is the first My Dying Bride album I checked out, and I've been in love with it ever since. It's My Dying Bride's darkest and most refined album.

The record of theirs that stood out the most to me. Pinnacle death/doom music. This shit hits right at home, extremely emotional, extremely personal, love every single moment of this record.

Your feedback for The Dreadful Hours