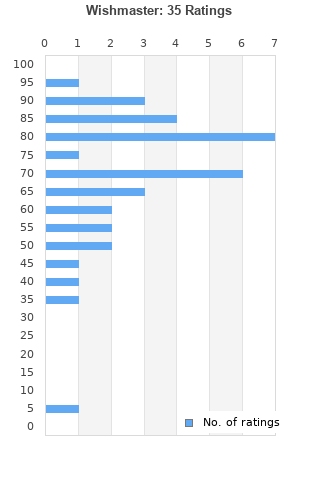 NIGHTWISH WISHMASTER CD +3 - JAPAN RMST SHM - Tarja Turunen - GIFT QUALITY!
Condition: Brand New
Time left: 1d 19h 59m 6s
Ships to: Worldwide
$34.88
Go to store
Product prices and availability are accurate as of the date indicated and are subject to change. Any price and availability information displayed on the linked website at the time of purchase will apply to the purchase of this product.  See full search results on eBay

Wishmaster is ranked 7th best out of 15 albums by Nightwish on BestEverAlbums.com.

The best album by Nightwish is Century Child which is ranked number 2523 in the list of all-time albums with a total rank score of 624.

Tickets from Ticketmaster Get tickets
May
10
Tue
20:00

Tickets from Ticketmaster Get tickets
May
13
Fri
18:00 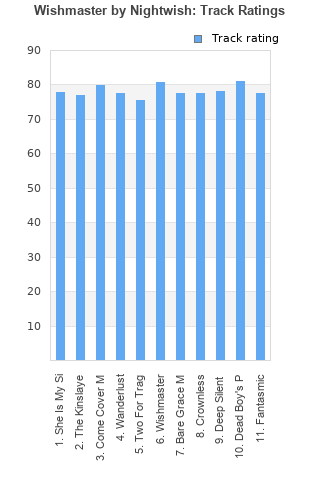 Rating metrics: Outliers can be removed when calculating a mean average to dampen the effects of ratings outside the normal distribution. This figure is provided as the trimmed mean. A high standard deviation can be legitimate, but can sometimes indicate 'gaming' is occurring. Consider a simplified example* of an item receiving ratings of 100, 50, & 0. The mean average rating would be 50. However, ratings of 55, 50 & 45 could also result in the same average. The second average might be more trusted because there is more consensus around a particular rating (a lower deviation).
(*In practice, some albums can have several thousand ratings)
This album has a Bayesian average rating of 72.4/100, a mean average of 69.4/100, and a trimmed mean (excluding outliers) of 72.0/100. The standard deviation for this album is 18.8.

I imagine what it would be like being interviewed by the NME in my spare time. Too much dreaming and reading their magazines in 6th form got those thoughts inside me. Well... I always wanted to appear outrageous and have views that challanged people and would practice them in my head. As this was the only thing remotely "metal" I had at the time I imagined myself saying non-chlantely saying that I always thought "Nightwish played better than Queen". It's not that it was an opinion (It isn't my opinion now) but it was the idea that I was more knowledgably about music. That I was walking down a less travelled path. Later found out they actually have millions of fans out there. I'm not exaggerating, they have a 7 figure number of fans! In my delusions back them I was hooked on 'Wanderlust' and the frantic playing that span everywhere, the relentless blizzard of 'She Is My Sin', loved the chorus of 'Bare Grace Misery' and looked at the sky 'Dead Boy's Poem'. Great times indeed.

Probably my least favorite Nightwish album - I feel it was a slight step back from Oceanborn. It's still good, though. Most of the songs are in that 80-85 "good" range, but very few (Wishmaster, Dead Boy's Poem) take it to the next level. Crownless is kind of annoying and comes across as mediocre power metal.

Your feedback for Wishmaster