The Best Of The Doors (compilation album) by The Doors 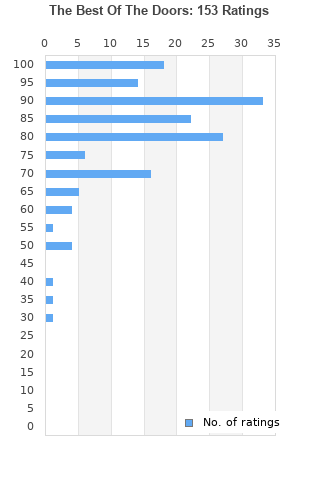 The Best Of The Doors is ranked 9th best out of 42 albums by The Doors on BestEverAlbums.com.

The best album by The Doors is The Doors which is ranked number 30 in the list of all-time albums with a total rank score of 34,990.

The BirkenRocks with The Tax on Doors and Windows
Cubby Bear, Chicago, United States.

Listen to The Best Of The Doors on YouTube 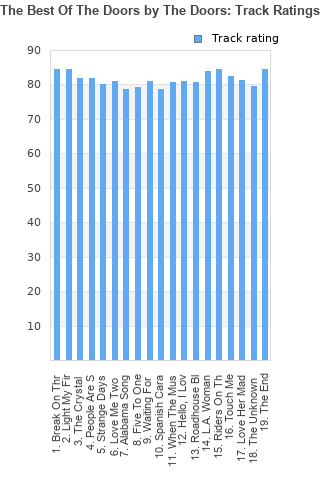 #
Track
Rating/Comments
1.
Break On Through (To The Other Side)
Rating: 84 (22 votes)Comments:

The Best Of The Doors rankings

The Best Of The Doors collection

The Best Of The Doors ratings

Rating metrics: Outliers can be removed when calculating a mean average to dampen the effects of ratings outside the normal distribution. This figure is provided as the trimmed mean. A high standard deviation can be legitimate, but can sometimes indicate 'gaming' is occurring. Consider a simplified example* of an item receiving ratings of 100, 50, & 0. The mean average rating would be 50. However, ratings of 55, 50 & 45 could also result in the same average. The second average might be more trusted because there is more consensus around a particular rating (a lower deviation).
(*In practice, some albums can have several thousand ratings)
This album is rated in the top 1% of all albums on BestEverAlbums.com. This album has a Bayesian average rating of 82.9/100, a mean average of 82.7/100, and a trimmed mean (excluding outliers) of 83.5/100. The standard deviation for this album is 13.7.

The Best Of The Doors favourites

The Best Of The Doors comments

Great compilation I played this over and over until it was time to seek out all the studio albums.

Are there any other bands that have recreated or reinvented this sound? (Like Oasis and the Beatles). I’d like to know. The doors were great and this is a very good collection. Love Me Two Times is my personal favourite but the organ makes their music stand out on many tracks.

A nice two disc collection containing most of the essential tracks form this seminal group. If you only want one Doors CD this is it.

Your feedback for The Best Of The Doors