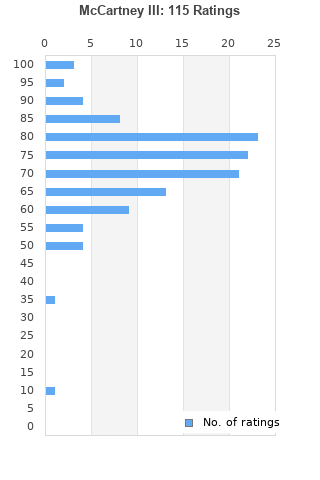 Paul McCartney McCartney III Imagined 2-LP Exclusive Splatter Vinyl LE New
Condition: New
Time left: 36m 12s
Ships to: Worldwide
$69.00
Go to store
Product prices and availability are accurate as of the date indicated and are subject to change. Any price and availability information displayed on the linked website at the time of purchase will apply to the purchase of this product.  See full search results on eBay

McCartney III is ranked 15th best out of 44 albums by Paul McCartney on BestEverAlbums.com.

The best album by Paul McCartney is McCartney which is ranked number 1589 in the list of all-time albums with a total rank score of 1,098. 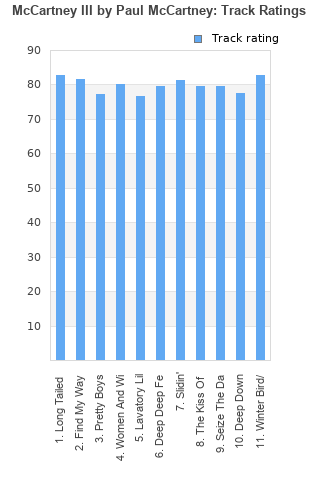 Rating metrics: Outliers can be removed when calculating a mean average to dampen the effects of ratings outside the normal distribution. This figure is provided as the trimmed mean. A high standard deviation can be legitimate, but can sometimes indicate 'gaming' is occurring. Consider a simplified example* of an item receiving ratings of 100, 50, & 0. The mean average rating would be 50. However, ratings of 55, 50 & 45 could also result in the same average. The second average might be more trusted because there is more consensus around a particular rating (a lower deviation).
(*In practice, some albums can have several thousand ratings)
This album is rated in the top 24% of all albums on BestEverAlbums.com. This album has a Bayesian average rating of 74.7/100, a mean average of 73.8/100, and a trimmed mean (excluding outliers) of 74.9/100. The standard deviation for this album is 12.6.

I wasn't that fond of this the first time I heard it, but I've been motivated to come back to it a few times since its release and its a grower. I appreciated it more with each listen. Very consistent tone and a very solid effort for an artist at this stage in their career.

Love the usual albums but McCartney does have the habit of playing it safe with his official solo records.
This does not do that. It goes in interesting directions while maintaining a home-spun atmosphere. Gonna play it wsy more than Egypt Station

One of his best solo works in a good long while. Bonus points for the self sufficiency on it

Why don't you for a start?

It is creative, but rather repetitive and lackluster most of the time.

One of my favorite albums released this year. Macca is such a talented musician. What stands out for me is that he really enjoys writing, recording & performing for his many loyal fans since the early 60's.

Your feedback for McCartney III