Because Of The Times (studio album) by Kings Of Leon 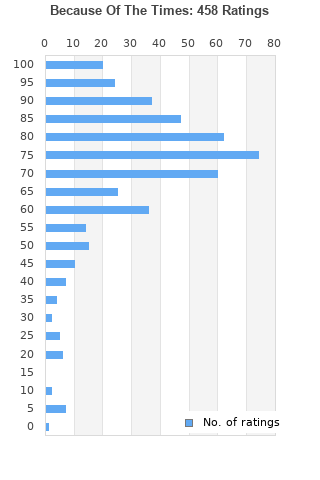 Kings Of Leon - Because Of The Times (2007) nm 003
Condition: Like New
Time left: 9h 3m 39s
Ships to: Worldwide
£6.25
Go to store
Product prices and availability are accurate as of the date indicated and are subject to change. Any price and availability information displayed on the linked website at the time of purchase will apply to the purchase of this product.  See full search results on eBay

Because Of The Times is ranked 3rd best out of 10 albums by Kings Of Leon on BestEverAlbums.com.

The best album by Kings Of Leon is Only By The Night which is ranked number 852 in the list of all-time albums with a total rank score of 2,199.

"ALT 98.7 Presents" Kings of Leon: When You See Yourself Tour
The Forum, Inglewood, United States. 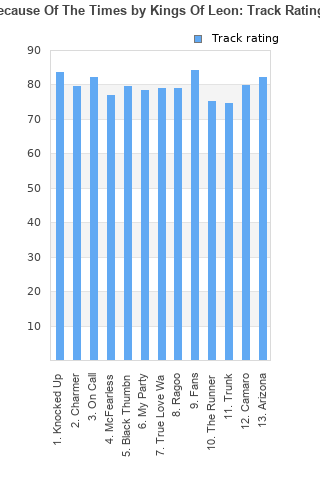 Because Of The Times rankings

Because Of The Times collection

Because Of The Times ratings

Rating metrics: Outliers can be removed when calculating a mean average to dampen the effects of ratings outside the normal distribution. This figure is provided as the trimmed mean. A high standard deviation can be legitimate, but can sometimes indicate 'gaming' is occurring. Consider a simplified example* of an item receiving ratings of 100, 50, & 0. The mean average rating would be 50. However, ratings of 55, 50 & 45 could also result in the same average. The second average might be more trusted because there is more consensus around a particular rating (a lower deviation).
(*In practice, some albums can have several thousand ratings)
This album has a Bayesian average rating of 73.1/100, a mean average of 71.6/100, and a trimmed mean (excluding outliers) of 73.1/100. The standard deviation for this album is 19.1.

Because Of The Times favourites

Because Of The Times comments

This is their best effort. The balance between raw and catchy has been achieved. Their next album swung too far on the pendulum toward the catchy end of the spectrum.

Kings of Leon make their second best album. Two albums stand out above the rest. Only the Night to Follow focused more on the melody with slow burners and a little bit of weird.

On Because of the Times they start tinkering with more melody and radio friendly riffs. They rock harder here and this is the best offering in terms of guitar thrashing that is accessible and appealing.

Knocked Up and Charmer to start, both excellent, keep the spirit of weird from their earlier stuff plus some melody.

I'm on Call is a great track that hints at what is to come on Only the Night.

McFearless and Camaro leave the garage for the arena. A welcome growth and change.

Other than Camaro it ends on a bit of a whimper.

This album along with Only the Night are Kings of Leon at their best.

At their core they are transition albums from raw garage rock to arena melody radio rock. On these two albums they combine those two identities--maybe unintentionally---but it gives this band a unique identity for a couple albums.

They had a strong identity to start their career but it wasn't accessible. And after Only the Night, they are arena rock's version of Maroon 5. Radio Friendly and single's driven.

Never liked this when it came out. Still frustrates me today as the point when KOL went from being a really cool sounding indie band to rock arena sellers. Their 5th best for me.

Kickass. "Knocked Up" might be my favorite Kings of Leon song yet.

My favourite Kings of Leon album. A much more refined sound to the Youth and Young Manhood and Aha Shake Heartbreak. One of my favourite songs of all time is Fans

Most of my best KOL tracks appear on here Knocked Up,Fans,On Call,Arizona to name a few most of these tend to be on their set list

Your feedback for Because Of The Times