Cherry Peel (album) by of Montreal 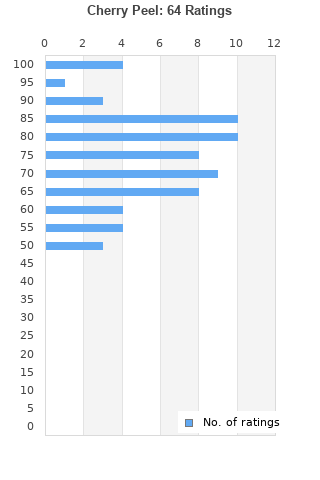 Cherry Peel is ranked 7th best out of 26 albums by of Montreal on BestEverAlbums.com.

The best album by of Montreal is Hissing Fauna, Are You The Destroyer? which is ranked number 482 in the list of all-time albums with a total rank score of 3,983. 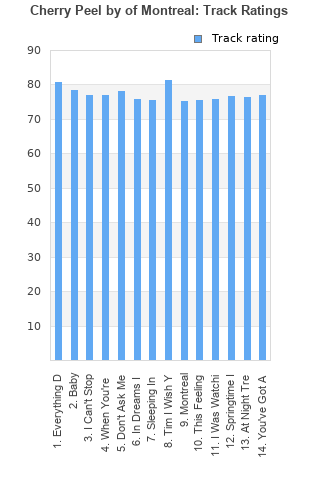 #
Track
Rating/Comments
1.
Everything Disappears When You Come Around
Rating: 81 (16 votes)Comments:

Outliers can be removed when calculating a mean average to dampen the effects of ratings outside the normal distribution. This figure is provided as the trimmed mean. A high standard deviation can be legitimate, but can sometimes indicate 'gaming' is occurring. Consider a simplified example* of an item receiving ratings of 100, 50, & 0. The mean average rating would be 50. However, ratings of 55, 50 & 45 could also result in the same average. The second average might be more trusted because there is more consensus around a particular rating (a lower deviation).
(*In practice, some albums can have several thousand ratings)
This album is rated in the top 18% of albums on BestEverAlbums.com. This album has a mean average rating of 75.0/100. The trimmed mean (excluding outliers) is 75.1/100. The standard deviation for this album is 12.4.

Some great low-fi tracks on here. Not everyone is a winner, but it's a fun record and more accessible than most as a first taste of these guys.

First of Montreal album I ever heard, and still one of my favorites. So simple, yet so catchy. You can really hear the Elephant 6 influence.

Your feedback for Cherry Peel