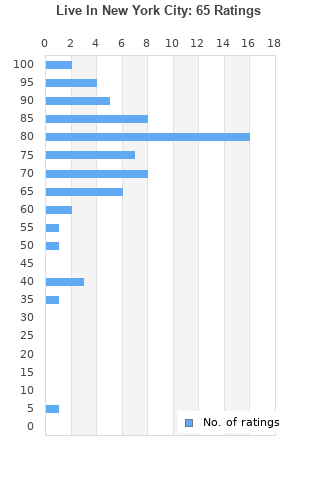 Live In New York City is ranked 3rd best out of 72 albums by Bruce Springsteen & The E Street Band on BestEverAlbums.com.

The best album by Bruce Springsteen & The E Street Band is Live/1975-85 which is ranked number 2785 in the list of all-time albums with a total rank score of 552. 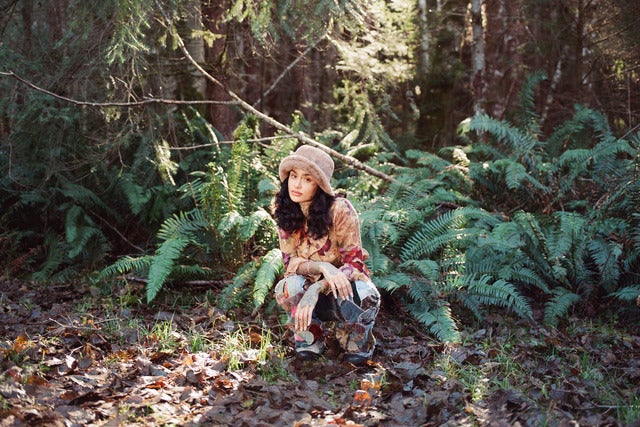 Listen to Live In New York City on YouTube 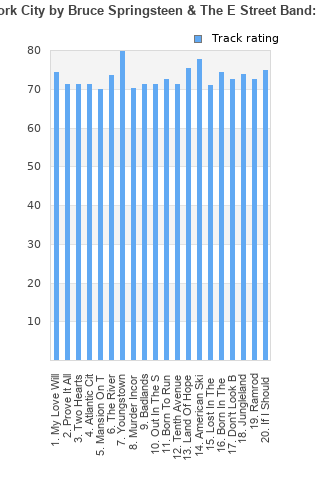 #
Track
Rating/Comments
1.
My Love Will Not Let You Down
Rating: 73 (5 votes)Comments:

Rating metrics: Outliers can be removed when calculating a mean average to dampen the effects of ratings outside the normal distribution. This figure is provided as the trimmed mean. A high standard deviation can be legitimate, but can sometimes indicate 'gaming' is occurring. Consider a simplified example* of an item receiving ratings of 100, 50, & 0. The mean average rating would be 50. However, ratings of 55, 50 & 45 could also result in the same average. The second average might be more trusted because there is more consensus around a particular rating (a lower deviation).
(*In practice, some albums can have several thousand ratings)
This album is rated in the top 9% of all albums on BestEverAlbums.com. This album has a Bayesian average rating of 75.7/100, a mean average of 75.0/100, and a trimmed mean (excluding outliers) of 76.1/100. The standard deviation for this album is 16.6.

Tough to pick a favorite album from the Boss, but I will give this live performance the nod. It was an HBO special, the first televised concert by the E-Street band, who'd been estranged from Bruce for nearly a dozen years. I rated this so highly because of the DVD, which I watch annually. Does that count?

As always with Springsteen live albums, it's thoroughly enjoyable. Some great versions, especially, the river, and, mansion on the hill. Electric performance.

Bruce's live energy can't never let you down. I only wish this was the whole show.

A partial show recording from Bruce's triumphant return home after circling the globe with a reunited E Street Band. This tour is what solidified Bruce as one of my favorite artists and therefore holds a special place in my heart. If he'd released a full show instead of this chopped up piece of one, it'd probably be my favorite live album.

Your feedback for Live In New York City