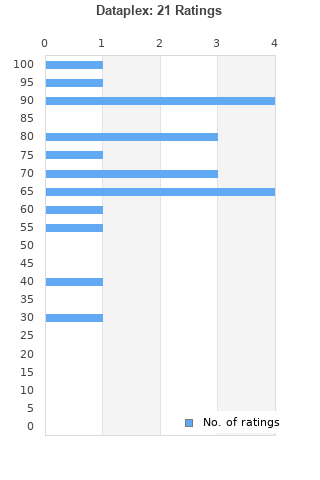 Dataplex is ranked as the best album by Ryoji Ikeda. 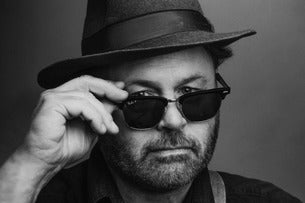 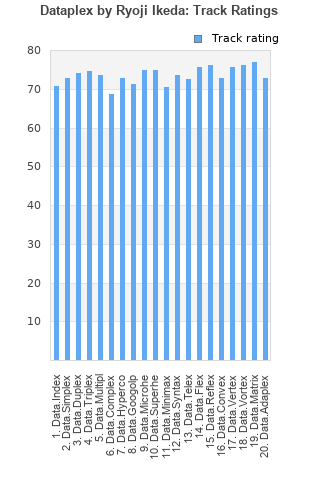 Rating metrics: Outliers can be removed when calculating a mean average to dampen the effects of ratings outside the normal distribution. This figure is provided as the trimmed mean. A high standard deviation can be legitimate, but can sometimes indicate 'gaming' is occurring. Consider a simplified example* of an item receiving ratings of 100, 50, & 0. The mean average rating would be 50. However, ratings of 55, 50 & 45 could also result in the same average. The second average might be more trusted because there is more consensus around a particular rating (a lower deviation).
(*In practice, some albums can have several thousand ratings)
This album has a Bayesian average rating of 73.4/100, a mean average of 73.5/100, and a trimmed mean (excluding outliers) of 73.5/100. The standard deviation for this album is 17.2.

one of the purest sonic distillations i've ever heard, climaxing in the sensational "data.matrix". it's very difficult to give this an overall rating (probably because what's the closest point of reference... autechre perhaps?) but i'm convinced that this was an exceptional journey that progressed incredibly well, from its sparse microsound openings, to something that resembles funky rhythms (from track 9 onwards) to skittering ambient electronic compositions (final few tracks). extremely well produced, just make sure those ultra-high frequencies don't pierce your brain too much

I think the fact that the only full songs come at the end is part of what makes this album so interesting. The majority of the tracks feel like short expositions of each individual piece of a puzzle, leading up to Data.matrix where all the pieces are finally put together.

At the same time it is almost best to think of the album as just one full song; one endless stream of super-slick avant minimal electronica.

its unfortunate that Data.Matrix is the only truly great song on this album. Nevertheless it was interesting listen.

Your feedback for Dataplex