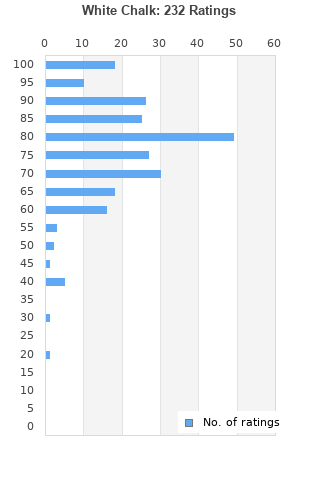 PJ Harvey-White Chalk (UK IMPORT) VINYL NEW
Condition: New
Time left: 21h 9m 54s
Ships to: Worldwide
$42.67
Go to store
Product prices and availability are accurate as of the date indicated and are subject to change. Any price and availability information displayed on the linked website at the time of purchase will apply to the purchase of this product.  See full search results on eBay

White Chalk is ranked 7th best out of 16 albums by PJ Harvey on BestEverAlbums.com.

The best album by PJ Harvey is Let England Shake which is ranked number 299 in the list of all-time albums with a total rank score of 6,546. 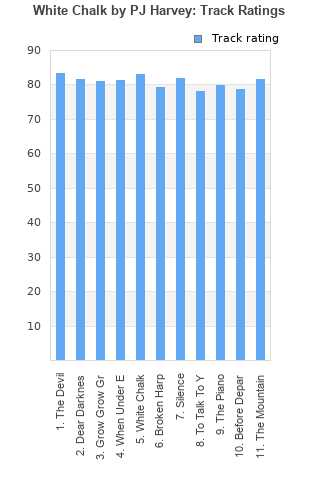 Rating metrics: Outliers can be removed when calculating a mean average to dampen the effects of ratings outside the normal distribution. This figure is provided as the trimmed mean. A high standard deviation can be legitimate, but can sometimes indicate 'gaming' is occurring. Consider a simplified example* of an item receiving ratings of 100, 50, & 0. The mean average rating would be 50. However, ratings of 55, 50 & 45 could also result in the same average. The second average might be more trusted because there is more consensus around a particular rating (a lower deviation).
(*In practice, some albums can have several thousand ratings)
This album is rated in the top 3% of all albums on BestEverAlbums.com. This album has a Bayesian average rating of 77.9/100, a mean average of 77.9/100, and a trimmed mean (excluding outliers) of 78.2/100. The standard deviation for this album is 13.6.

Released at roughly the halfway point of Polly Jeans career ‘White Chalk’ is in many ways her forgotten album quietly dropped between the mega hits ‘Stories . . . ‘ (2000) and ‘Let England Shake’ (2011)

When it first came out I for one was not prepared for the intricate delicate nature of this album, like a fine china cup or broken heart and I moved on pretty quickly. However time has been kind to this one and is now one of my favourite Harvey albums even if John Parish’s fingerprints are all over it

I'm a great fan of PJ Harvey but on this album she took a huge directional change. I understand artists mix it up a bit but this done nothing for me. An entire album of plink plonk piano and haunting vocals. I tried to like it, I really did. Multiple listens but it didn't take. To far removed from her previous work for my liking. If you've just started checking her music out, I recommend starting with her other albums.

Very solid album. Not my favourite of pj’s but it has its moments

Another brilliant PJ Harvey album. White chalk, is a haunting record full of piano based songs that sound like they were recorded in a church. It's a superb album, full of great songs, no weak tracks here. This is one of my favourite of her records. Brilliant.

A departure, but not necessarily a bad one. This is brooding, haunting, heartbreaking.

Following a career filled with gritty rock, White Chalk was seen as a departure for PJ Harvey. Sparse arrangements focused around piano and harp, it's her most haunting record. The desperation, fragility and loneliness speaks more to me than anything else she's done.

Always liked PJ, but this album completely won we over for her. It is radical departure from the explosive debut albums, but the aggression or passion is still very much there, although much more hidden. She uses her voice in a different way, very much at the limit of her reach. Daring and haunting album; an absolute favorite.

Stellar, unsettling album. There are times when PJ seems to be melodramitic to the point of absurdity, but the songs (and the subjects) seem to be talking about such strange, though rather sad, subjects that the occasional over-reach seems more than forgive-able. "The Piano" in particular is utterly haunting (and haunted), seeming personal despite it's literary allusions

Your feedback for White Chalk