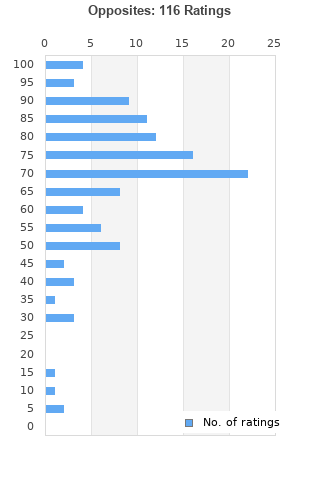 Opposites is ranked 3rd best out of 14 albums by Biffy Clyro on BestEverAlbums.com.

The best album by Biffy Clyro is Only Revolutions which is ranked number 2001 in the list of all-time albums with a total rank score of 837. 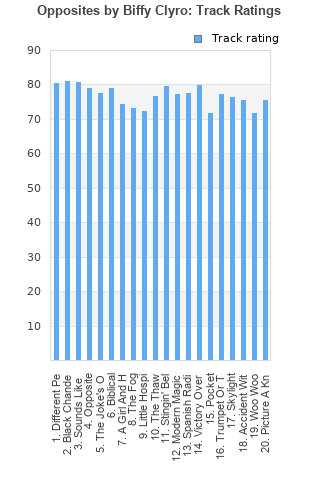 Rating metrics: Outliers can be removed when calculating a mean average to dampen the effects of ratings outside the normal distribution. This figure is provided as the trimmed mean. A high standard deviation can be legitimate, but can sometimes indicate 'gaming' is occurring. Consider a simplified example* of an item receiving ratings of 100, 50, & 0. The mean average rating would be 50. However, ratings of 55, 50 & 45 could also result in the same average. The second average might be more trusted because there is more consensus around a particular rating (a lower deviation).
(*In practice, some albums can have several thousand ratings)
This album has a Bayesian average rating of 71.4/100, a mean average of 69.5/100, and a trimmed mean (excluding outliers) of 71.2/100. The standard deviation for this album is 19.2.

After such a huge success as 'Only Revolutions', Biffy Clyro have some huge boots to fill. How to repeat that success without doing too much of the same thing? The answer lies in the 2013 follow-up LP 'Opposites', a 20-track double album with two very distinct halves. The first half is melancholic but powerful, with beautiful mood lifters, such as 'Opposite', one of the best songs the band has ever written. This melancholic sound slowly grows into the more energetic and uptempo sound on the second half. That's also where the music is starting to repeat itself, and the album turns pretty tiresome. Not even a soul-like playfulness on 'Trumpet or Trap' helps in this situation.

The melodic sound from 'Only Revolutions' returns here, somewhat filler, more majestic and less rhythmic, though. That results in a very radio-friendly sound that doesn't quite stick out as well as it did on the previous record. The melodies aren't quite as catchy this time around, even if the instrumentation is still as confident as ever. The biggest problem is the amount of filler this album contains. It could have been shortened quite a lot, even if the filler songs are better than most filler songs tend to be. The middle songs in particular, from 'A Girl And His Cat' to 'Little Hospitals', are pretty forgettable.

A double album is always something very risky... but in my opinion Biffy just managed to create a really amazing record with Opposites... The first CD, "The sand at the core of our bones" having songs with more melancholic lyrics, and the second, "The land at the end of our toes" with more optimistic ones.

Despite being a really long album (and for that reason it may scare a lot of people away), I really don't get tired of listening to it completely... Although it is true that some tracks feel just a tad like filler (Pocket, Woo Woo, for example).

Nevertheless in my opinion it's a great record, and Biffy is without a doubt, one of the best Rock bands out there from the 2000's.

Too many tracks imo. They should have kept this shorter and more intense by leaving unnecessary tracks like Pocket, Accident Without Emergency, The Fog or Little Hospitals out. Anyway, it shows a new side of the band which is quite interesting with songs like Skylight and Trumpet or Tap. I hope they keep on making things interesting on the next record

So much to take in... our Scottish saviors have blessed us with a wonderful feast! Black Chandelier and Biblical are the ones which stand out for me right now. I have heard the rest a lot less. I don't remember a single moment I wasn't enjoying it though. Lovely album!

Your feedback for Opposites