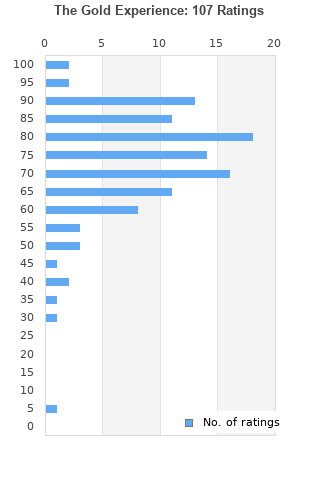 The Gold Experience is ranked 8th best out of 58 albums by Prince on BestEverAlbums.com.

The best album by Prince is Sign 'O' The Times which is ranked number 216 in the list of all-time albums with a total rank score of 8,936. 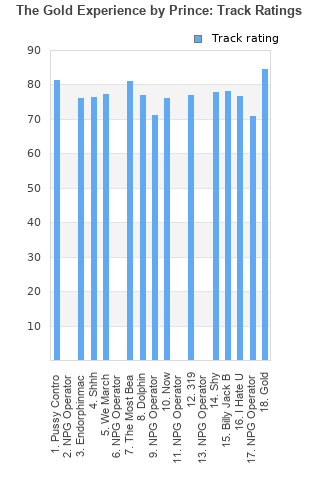 Rating metrics: Outliers can be removed when calculating a mean average to dampen the effects of ratings outside the normal distribution. This figure is provided as the trimmed mean. A high standard deviation can be legitimate, but can sometimes indicate 'gaming' is occurring. Consider a simplified example* of an item receiving ratings of 100, 50, & 0. The mean average rating would be 50. However, ratings of 55, 50 & 45 could also result in the same average. The second average might be more trusted because there is more consensus around a particular rating (a lower deviation).
(*In practice, some albums can have several thousand ratings)
This album has a Bayesian average rating of 73.9/100, a mean average of 73.5/100, and a trimmed mean (excluding outliers) of 74.0/100. The standard deviation for this album is 14.0.

The First Album Since He Changed His Name Into The Symbol，It Was Also the Best 1 That Era，His Lyrics R Mostly Weird（And Meaningless） in This One Except 4 Dolphin and Gold.
Highlights：Endorphinmachine，Dolphin，319，Now，Shy，Billy Jack Bitch，Gold，Eye Hate U.
Least Favorite：P Control（I Really Hate This One，2 Cringey 4 Me）
Rating：8.5/10

This record is a mixed bag. There is some great material on here and some filler. The operator gets really tiresome upon repeated play.

Very fun album. Not one of his best, but still great.

His best of the symbol years. Pussy Control is fantastic.

This was another disappointing album. There are a few really great songs but it goes beyond inconsistent.

"the gold experience" marked the beginning of the denouement of prince's career. He rehashes a number of sounds from his last album along with a song he lent to tevin campbell. The songs were funky but not enough to make classics out of songs like "pussy control" and "dolphin" like he pulled off on "love symbol". After this album, it's R.I.P. prince.

Your feedback for The Gold Experience