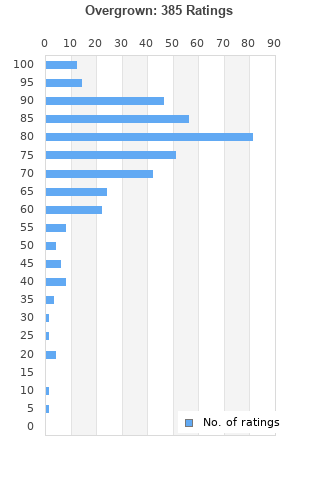 Overgrown is ranked 2nd best out of 9 albums by James Blake on BestEverAlbums.com.

The best album by James Blake is James Blake which is ranked number 745 in the list of all-time albums with a total rank score of 2,498. 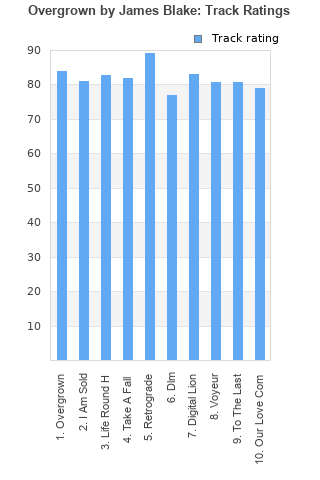 Rating metrics: Outliers can be removed when calculating a mean average to dampen the effects of ratings outside the normal distribution. This figure is provided as the trimmed mean. A high standard deviation can be legitimate, but can sometimes indicate 'gaming' is occurring. Consider a simplified example* of an item receiving ratings of 100, 50, & 0. The mean average rating would be 50. However, ratings of 55, 50 & 45 could also result in the same average. The second average might be more trusted because there is more consensus around a particular rating (a lower deviation).
(*In practice, some albums can have several thousand ratings)
This album is rated in the top 6% of all albums on BestEverAlbums.com. This album has a Bayesian average rating of 76.5/100, a mean average of 75.5/100, and a trimmed mean (excluding outliers) of 76.6/100. The standard deviation for this album is 15.4.

In terms of genre, Overgrown has James Blake exploring more expansive territory than on his excellent self-titled debut album: sometimes he's working with electronic effects, turning them over and over again to examine their various facets; at other times he's firmly in a soulful rhythm-and-blues mode, using his voice to find complicated emotional meanings. Attempting to explain his inspiration for album's great single "Retrograde," Blake said, "Falling in love. [...] I can't deny it. There's no point in trying to come up with some other explanation for what I've been writing about. When it happened, I was really struck. Y'know, 'Suddenly I'm hit!'"

Although I prefer its haunting predecessor, this sophomore effort is still a great one, filled with lush electronic landscapes. Timeless beauty.

James Blake is quickly becoming one of my favorite artists. With each album, he improves upon his sound. This project is more listenable than his first effort, and has him developing his craft at songwriting. All in all, a great listen and one of my favorites to have come out last year.

It's really great! His achievement in the sound throughout the album is amazing.

James Blake knows his sound and knows what he wants to do. Just recently he caught the attention of the great Kanye West. My favorite thing about James is he really doesn't care to make accessible music. Instead it opts for the extremely contemplative and deep. It's not easy to reach at all. It's one of those 'if you shut everything else off and really focus on every single little sound and progression, you discover it' type of deals.

A top ten album in 2013. When I first heard Julianna Barwick's "Nepenthe", I thought it might be a better record in a similar vein. After a few more listens, this one is broader, more ambitious, and just plain better.

Was pleasantly surprise how much I liked this album. Really laid back tracks. I will be checking out his debut.

I love this guy's style and this album is a big improvement over his debut.

This album is really great and a step-up, RZA actually fit in very well.

Your feedback for Overgrown