Hail To The King (studio album) by Avenged Sevenfold 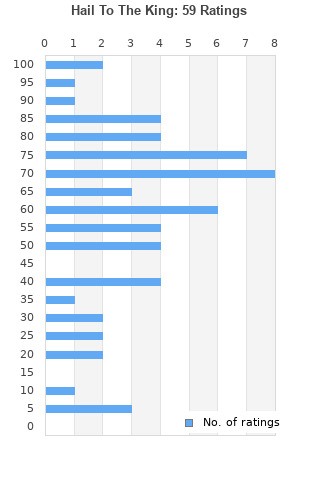 Avenged Sevenfold - Hail To The King - Sound Wave Vector Art Print - A4 Size
Condition: New
Time left: 1d 9h 27m 39s
Ships to: Worldwide
£11.99
Go to store
Product prices and availability are accurate as of the date indicated and are subject to change. Any price and availability information displayed on the linked website at the time of purchase will apply to the purchase of this product.  See full search results on eBay

Hail To The King is ranked 6th best out of 12 albums by Avenged Sevenfold on BestEverAlbums.com.

The best album by Avenged Sevenfold is Nightmare which is ranked number 2111 in the list of all-time albums with a total rank score of 781. 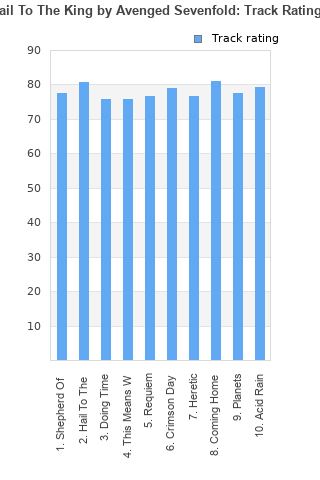 Hail To The King rankings

Hail To The King collection

Hail To The King ratings

Rating metrics: Outliers can be removed when calculating a mean average to dampen the effects of ratings outside the normal distribution. This figure is provided as the trimmed mean. A high standard deviation can be legitimate, but can sometimes indicate 'gaming' is occurring. Consider a simplified example* of an item receiving ratings of 100, 50, & 0. The mean average rating would be 50. However, ratings of 55, 50 & 45 could also result in the same average. The second average might be more trusted because there is more consensus around a particular rating (a lower deviation).
(*In practice, some albums can have several thousand ratings)
This album has a Bayesian average rating of 61.9/100, a mean average of 59.7/100, and a trimmed mean (excluding outliers) of 59.7/100. The standard deviation for this album is 25.4.

Hail To The King favourites

Hail To The King comments

Decent album, check this out for some simple hard rock. "Crimson Day" is probably my favorite track. It is a perfect way to show how well M. Shadows can actually sing. That's honestly the most memorable track, maybe besides "Shepherd Of Fire" and "Coming Home." This has been done to death, but "This Means War," while being a decent song, is honestly a blatant copy of "Sad But True" by Metallica. That's honestly my only bad criticism of the album. It's not their best, but not their worst either. Pretty average album.

Packs a punch, but not their best in terms of creativity (like their new album The Stage). Still a very good album!

My favorite track is in fact the bonus track St. James :)

I feel this album is unfairly overlooked because there are many borrowed ideas from previous metal bands. So what? Not every record has to be groundbreaking. This is an enjoyable homage to 80s/90s metal, with some great guitar licks and solos.

Your feedback for Hail To The King