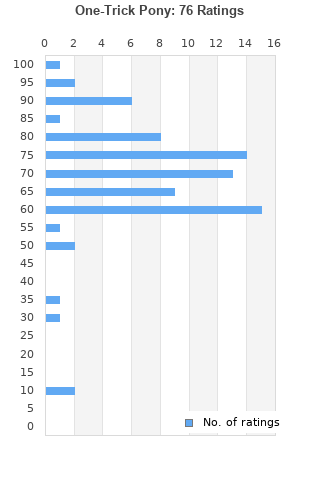 One Trick Pony by Paul Simon (CD, May-1987, Warner Bros.)
Condition: Acceptable
Time left: 4h 41m 44s
Ships to: Worldwide
$9.95
Go to store
Product prices and availability are accurate as of the date indicated and are subject to change. Any price and availability information displayed on the linked website at the time of purchase will apply to the purchase of this product.  See full search results on eBay

One-Trick Pony is ranked 12th best out of 26 albums by Paul Simon on BestEverAlbums.com.

The best album by Paul Simon is Graceland which is ranked number 129 in the list of all-time albums with a total rank score of 13,359. 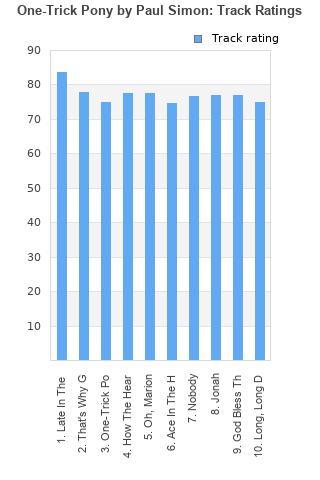 Rating metrics: Outliers can be removed when calculating a mean average to dampen the effects of ratings outside the normal distribution. This figure is provided as the trimmed mean. A high standard deviation can be legitimate, but can sometimes indicate 'gaming' is occurring. Consider a simplified example* of an item receiving ratings of 100, 50, & 0. The mean average rating would be 50. However, ratings of 55, 50 & 45 could also result in the same average. The second average might be more trusted because there is more consensus around a particular rating (a lower deviation).
(*In practice, some albums can have several thousand ratings)
This album has a Bayesian average rating of 71.4/100, a mean average of 69.5/100, and a trimmed mean (excluding outliers) of 71.1/100. The standard deviation for this album is 15.3.

Some great tracks, but a little inconsistent. It makes sense that his commercial success started to come off the wheels a bit during this period.

Highlights: Late in the Evening, How the Heart Approaches What It Yearns, Ace in the Hole, Jonah
Lowlights: Oh Marion, God Bless the Absentee

One trick pony, is actually a soundtrack album to the film of the same name. The movie stars Paul Simon and as far as rock stars playing rock stars in movies, it's not bad at all, certainly better than hearts of fire, or, give my regards to broad street. As for the album itself, it isn't one of Simon's best, it's okay, but only, late in the evening, is grade A Paul Simon. Best of the rest though is the live recording, ace in the hole, that's why God made the movies, and, the title track. The rest is fine, Simon is always worth listening to, but it feels a little short on inspiration. Not bad.

A well crafted but ultimately unsatisfying slice of pop pie.

Some gorgeous songs! Very classy stuff. A little too polite to make much of an impact in 1980, but has stood the test of time really well. Absolutely nothing wrong with it, just unfashionable.

Paul Simon's weakest, but actually not that bad. A testimony to how listenable he is.

Your feedback for One-Trick Pony