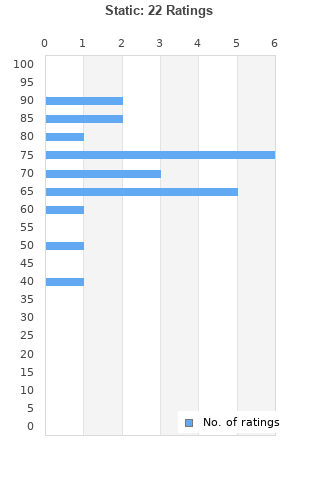 Static is ranked 2nd best out of 5 albums by Cults on BestEverAlbums.com.

The best album by Cults is Cults which is ranked number 4967 in the list of all-time albums with a total rank score of 270. 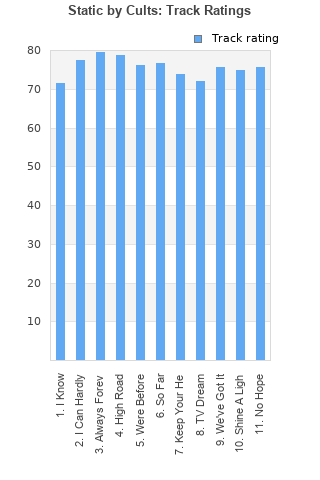 Rating metrics: Outliers can be removed when calculating a mean average to dampen the effects of ratings outside the normal distribution. This figure is provided as the trimmed mean. A high standard deviation can be legitimate, but can sometimes indicate 'gaming' is occurring. Consider a simplified example* of an item receiving ratings of 100, 50, & 0. The mean average rating would be 50. However, ratings of 55, 50 & 45 could also result in the same average. The second average might be more trusted because there is more consensus around a particular rating (a lower deviation).
(*In practice, some albums can have several thousand ratings)
This album has a Bayesian average rating of 71.7/100, a mean average of 71.1/100, and a trimmed mean (excluding outliers) of 71.1/100. The standard deviation for this album is 11.7.

A lot of the excitement of their debut has faded a bit. They seem stuck in the same formula as the debut with less good ideas to form songs around. They make me think of a more new wave white stripes, but the stripes'-type of irresistable hooks are mostly missing.

Not much stands out at all and while I didn't hate it I certainly didn't find anything I'd be willing to return to. If you really liked their first album though then you probably won't be too disappointed here.

Not one insanely good song, not one awful song

Your feedback for Static