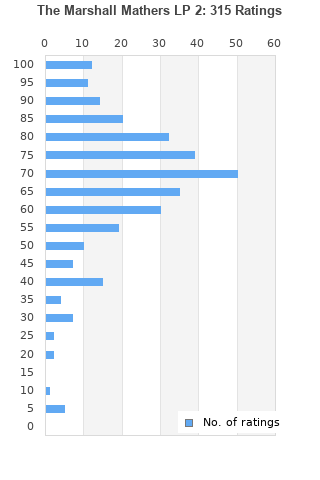 The Marshall Mathers LP 2 [PA] by Eminem (CD, 2013, Interscope) *NEW* FREE Ship
Condition: Brand New
Time left: 1d 5h 14m 11s
Ships to: Worldwide
$9.95
Go to store
Product prices and availability are accurate as of the date indicated and are subject to change. Any price and availability information displayed on the linked website at the time of purchase will apply to the purchase of this product.  See full search results on eBay

The Marshall Mathers LP 2 is ranked 5th best out of 15 albums by Eminem on BestEverAlbums.com.

The best album by Eminem is The Marshall Mathers LP which is ranked number 235 in the list of all-time albums with a total rank score of 8,362. 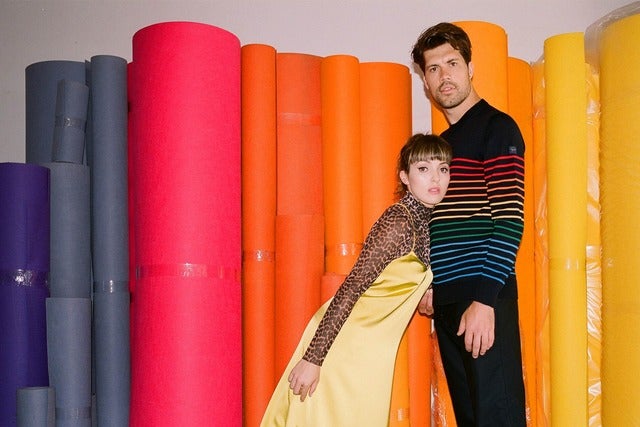 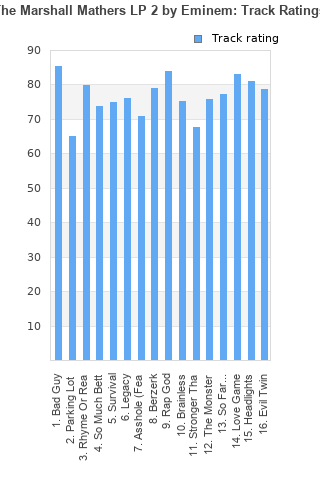 Rating metrics: Outliers can be removed when calculating a mean average to dampen the effects of ratings outside the normal distribution. This figure is provided as the trimmed mean. A high standard deviation can be legitimate, but can sometimes indicate 'gaming' is occurring. Consider a simplified example* of an item receiving ratings of 100, 50, & 0. The mean average rating would be 50. However, ratings of 55, 50 & 45 could also result in the same average. The second average might be more trusted because there is more consensus around a particular rating (a lower deviation).
(*In practice, some albums can have several thousand ratings)
This album has a mean average rating of 67.0/100. The trimmed mean (excluding outliers) is 67.9/100. The standard deviation for this album is 18.9.

I personally enjoyed this album. I listened to it when it came out in 2013 and still play it in full. However the deluxe version has 5 songs that should of been in the album for sure, wicked ways, groundhog day, beautiful pain are fantastic song and definitely make the album better than the standard edition. I would recommend listening to the deluxe version instead, a 7/10 standard, and 8.5/10 with the deluxe version. This easily has its place beside MMLP, TES, TSSLP. One of my favourite albums of 2013. Bad guy is one of eminems best songs and definitely deserves being nicknamed Stan part 2. Rhythm or reason, headlights, love game, rap god, headlights, evil twin, monster, are definitely highlights. As stated above the five deluxe version songs are fantastic. The biggest con of this project is the hooks, some ain't great but if you look past them you'll love this album. If you're into lyrics this album is a must for you.

Like most of Eminem 2010's album, it is very inconsistent but it contains some very good bars from Em. It also contains a lot of bad tracks like Legacy, Evil twin and stronger than I was.

This album has a special place in my heart and I don't even think it's that great. This was the first album I got hyped for back when I was in 6th grade. My friends and I worshiped Eminem. Ahh... good times. 8/10 for nostalgia.

This is the first Eminem album that didn't feel necessary. I can't shake the feeling that he continues making albums because he doesn't know what else to do. The last time he attempted to retire and do something else with his life he fell back into addiction.

It's an awkward listen because he has said all of this already, it is more just doing it because he doesn't know what else to do which turns him into a tragic figure instead of an icon.

Recovery chronicled his battle with addiction and focused on his own vulnerability and limitations as a man, a more humble record than any previous release which made it necessary in seeing another side to Eminem.

This album has highlights;
Headlights is an amends to his mother
Rhyme or Reason brings attention to his absent father
Monster continues his battle with inner demons
Rap God is awesome!
Love Game with Kendrick Lamar is an alternative cut to the usual Eminem sound

Bad Guy, Survival, Legacy, Berzerk are all above average too

It is Eminem's fourth best album. A little better than his goofy debut because of it's substance.

Unfortunately, people aren't really interested anymore. Most rappers retire middle aged after they have made their money. Their conflict was with the outside world, culture and gangs and poverty. Making their money they move on with their life

Eminem's conflicts are internal. Until they are conquered his only salvation, rapping, will continue. But people will probably stop listening soon.

Eminem is no longer the same guy that recorded the first MMLP. We're probably never getting that guy back. This however is the best from his current version. An improvement from Recovery.

Best eminem album imo. Shows all of his technicall abilities

Well, it sounds good. Predictable, but good. I didn’t expect much originality from “Album I Made Like Thirteen Years Ago Part II” anyway. I’m mostly turned off by the lyrics. Not because they’re offensive, but because they’re really nothing special. Style over substance. Eminem’s method goes something like this: 1) blurt out something provocative 2) ramble on about how provocative what you just said was.

Fine, I’m generalizing. I’m mostly thinking about “Rap God” (most of the other songs were pretty forgettable anyway). I’ve never seen anybody talk for so long, sounding so cool, and managing not to say anything at all. However, I’m almost embarrassed to admit I actually had a lot of fun listening to “Survival” .

It´s almost tied with Recovery (7.9) but a little wicker. Eminem´s last album (yet) it´s as acceptable as Recovery, and for his true fans is really enjoyable. He´s got a very (but acceptable) strange ending, using the machinees for editing the sound, including his and others voices in the songs. Eminem made a unrealistic, psychotic album with new pop rhymes and strange machines editings, it´s enjoyable and it´s free for being attacked by critcs

It's not bad I guess, I don't think it's a step up from Recovery though.

Your feedback for The Marshall Mathers LP 2