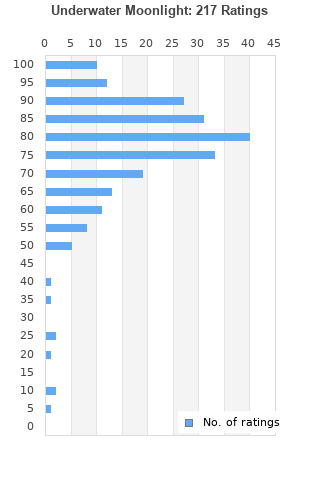 The Soft Boys-Underwater Moonlight (UK IMPORT) CD NEW
Condition: Brand New
Time left: 2d 16h 16m 51s
Ships to: Worldwide
$12.61
Go to store
Product prices and availability are accurate as of the date indicated and are subject to change. Any price and availability information displayed on the linked website at the time of purchase will apply to the purchase of this product.  See full search results on eBay

Underwater Moonlight is ranked as the best album by The Soft Boys.

Tickets from Ticketmaster Get tickets
May
20
Wed
19:00 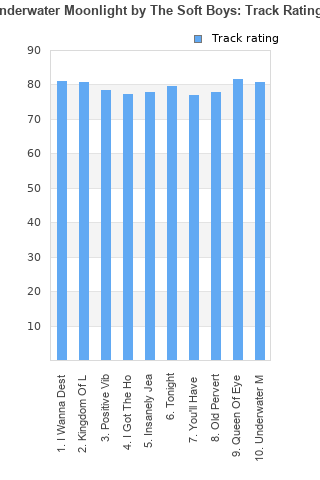 Rating metrics: Outliers can be removed when calculating a mean average to dampen the effects of ratings outside the normal distribution. This figure is provided as the trimmed mean. A high standard deviation can be legitimate, but can sometimes indicate 'gaming' is occurring. Consider a simplified example* of an item receiving ratings of 100, 50, & 0. The mean average rating would be 50. However, ratings of 55, 50 & 45 could also result in the same average. The second average might be more trusted because there is more consensus around a particular rating (a lower deviation).
(*In practice, some albums can have several thousand ratings)
This album is rated in the top 3% of all albums on BestEverAlbums.com. This album has a mean average rating of 77.0/100. The trimmed mean (excluding outliers) is 78.3/100. The standard deviation for this album is 15.4.

never heard of it. now i was really surprised about the qualitiy of this record. as loveless said: growing stronger with every track. there are just 2 or 3 weaker songs - the rest is good or very good stuff.

The missing link between #1 Record and Tim.

Well I was a bit sceptical the first couple of tracks, but then it just kept getting better (and more interesting) track by track. Will be replaying this.

Refreshing, daring and fun. Everything can be heard in this, Dylan, Television, Syd Barret, The Fall, 13th Floor Elevators, The Kinks.

Perfect Album, every track has something new.

Brilliant, refreshing, daring and fun. It is enjoyment put on a silver disc! Something I am happy to let into my life, I'll be sure to write more later.

Hard not to love this one...silly and beautiful masterpiece of subversive pop

Released in 1980, 'Underwater Moonlight' is an album that has stood the test of time remarkably well and still sounds fresh and inventive. Reminscent of the work of Television and Syd Barrett-era Pink Floyd, the band manage to straddle the early new-wave of the former and the psychedlic whimsy of the latter with the discordant fragmented blues of Beefheart to produce a distinctive and accomplished music. The band could arguably be said to have invented the '80s 'paisley' movement.

Your feedback for Underwater Moonlight