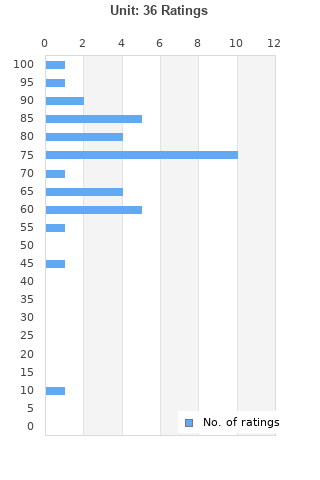 Unit is ranked as the best album by Regurgitator. 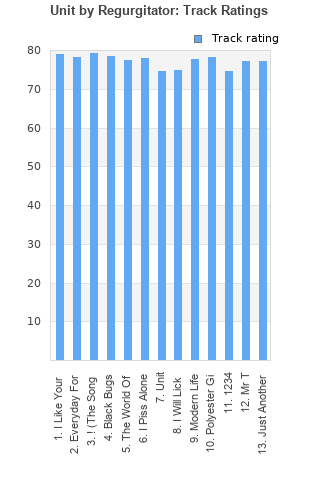 #
Track
Rating/Comments
1.
I Like Your Old Stuff Better Than Your New Stuff
Rating: 79 (4 votes)Comments:

Rating metrics: Outliers can be removed when calculating a mean average to dampen the effects of ratings outside the normal distribution. This figure is provided as the trimmed mean. A high standard deviation can be legitimate, but can sometimes indicate 'gaming' is occurring. Consider a simplified example* of an item receiving ratings of 100, 50, & 0. The mean average rating would be 50. However, ratings of 55, 50 & 45 could also result in the same average. The second average might be more trusted because there is more consensus around a particular rating (a lower deviation).
(*In practice, some albums can have several thousand ratings)
This album is rated in the top 25% of all albums on BestEverAlbums.com. This album has a Bayesian average rating of 74.1/100, a mean average of 74.4/100, and a trimmed mean (excluding outliers) of 74.4/100. The standard deviation for this album is 11.7.

All-Music generally gives reasonably positive reviews for most albums they cover however this album received a scathing write up claiming it was a pale imitation of TISM, They Might Be Giants and Prince among other things. Yeah I get it there are some juvenile sentiments sprinkled among the tracks but come on guys lighten up, this is a really good album recognised as one Australia’s finest 90’s releases

This album is an amazing mix of pop music, eighties inspired synth, heavy hip hop, cool rock and more. It tackled all forms of society with an R-rating on some songs and is pure genius from this band from Brisbane. A must listen to all who like variety and combining 80's and 90's styles together. Lots of great hits like Black Bugs and Polyester Girl.

Your feedback for Unit