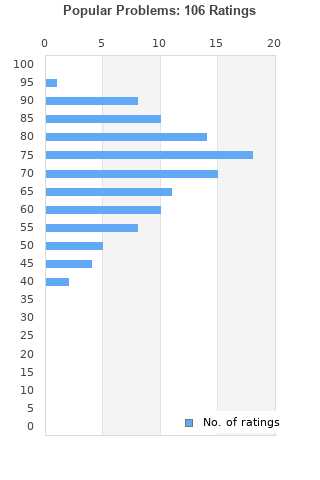 Popular Problems is ranked 13th best out of 27 albums by Leonard Cohen on BestEverAlbums.com.

The best album by Leonard Cohen is Songs Of Leonard Cohen which is ranked number 155 in the list of all-time albums with a total rank score of 10,969. 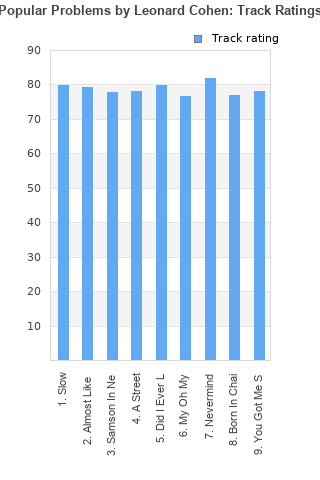 Rating metrics: Outliers can be removed when calculating a mean average to dampen the effects of ratings outside the normal distribution. This figure is provided as the trimmed mean. A high standard deviation can be legitimate, but can sometimes indicate 'gaming' is occurring. Consider a simplified example* of an item receiving ratings of 100, 50, & 0. The mean average rating would be 50. However, ratings of 55, 50 & 45 could also result in the same average. The second average might be more trusted because there is more consensus around a particular rating (a lower deviation).
(*In practice, some albums can have several thousand ratings)
This album has a Bayesian average rating of 71.1/100, a mean average of 71.0/100, and a trimmed mean (excluding outliers) of 71.0/100. The standard deviation for this album is 12.7.

Interesting and fresh which is great coming from an 80 year old artist. Unfortunately this is very overlooked but it's easily on par with You Want It Darker which received more attention because of Cohen's passing.

Unfortunately, I had neglected to give this album enough attention until I heard the sad news of Leonard's passing, that is when I immersed myself in his back catalogue. I had been a fan for 15 years or so prior to this I might add.

Until then I had incorrectly presumed this album may be little more than outtakes from the Old Ideas album.

For me this album has now gradually grown in stature and I would now place it above Old Ideas in quality. As is the norm, it doesn't have the best cover art and the album title is not great but the songs therein are what matters!

One of Leonard Cohen's best albums for years. It's great to hear him still using new sounds. Some dance textures here. Cohen's voice is pretty much gone but the songs are still there. Slow, almost like the blues, did I ever love you, and, nevermind, all excellent. Good contemporary sounding album.

It's time to retire Cohen...

Cohen is about to turn 80, and I can only say Wow, how can he still be able to write, compose and perform so nice songs at this age. I mean, of course his albums from his 60-70's are probably better, but you can listen to this and just relax while you enjoy the music and his broken voice.

Your feedback for Popular Problems