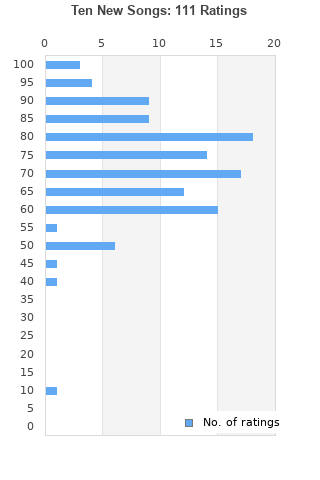 Ten New Songs is ranked 10th best out of 27 albums by Leonard Cohen on BestEverAlbums.com.

The best album by Leonard Cohen is Songs Of Leonard Cohen which is ranked number 154 in the list of all-time albums with a total rank score of 10,972. 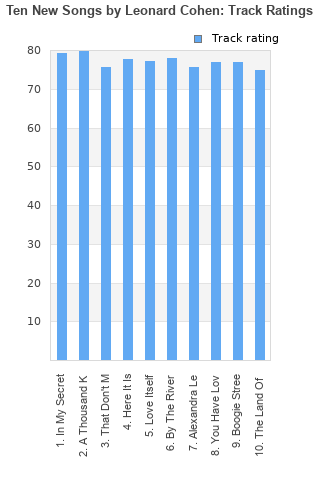 Rating metrics: Outliers can be removed when calculating a mean average to dampen the effects of ratings outside the normal distribution. This figure is provided as the trimmed mean. A high standard deviation can be legitimate, but can sometimes indicate 'gaming' is occurring. Consider a simplified example* of an item receiving ratings of 100, 50, & 0. The mean average rating would be 50. However, ratings of 55, 50 & 45 could also result in the same average. The second average might be more trusted because there is more consensus around a particular rating (a lower deviation).
(*In practice, some albums can have several thousand ratings)
This album has a Bayesian average rating of 72.6/100, a mean average of 72.0/100, and a trimmed mean (excluding outliers) of 72.6/100. The standard deviation for this album is 14.4.

This is the album that began the final phase of Cohen's career, a phase that also includes Dear Heather, Popular Problems, Old Ideas, and You Want it Darker. In my opinion, Ten New Songs is the best of that lot (though You Want it Darker is also a contender). It is also one of Cohen's greatest albums and though it may not hit the heights/peaks of some of his earlier album, it is really consistently good all the way through. There are some great lyrics on this record and a more hopeful tone than some other albums. Thematically it is driven by interior concerns and lacks the social commentary one finds on The Future, but that is ok in my opinion. LC sounds to me like he really has something to say on this album, and it is an affirmation of existence. I feel the content is richer and deeper than some of what appears on Popular Problems, Dear Heather, and Old Ideas.

A very laid back and soulful album from Leonard Cohen. Ten new songs, in a way, is a collobaration with Anjani Thomas and Sharon Robinson, who help out on vocal duties considering Cohen can hardly sing a note anymore. Still, some nice songs in, a thousand kisses deep, love itself, and, Alexandra leaving. Ten new songs, sonically, is the kind of record Leonard Cohen would continue to make, for probably the rest of his career. A very good album, and though hardly essential or challenging, it is a lovely record.

One of my all time favorite albums. Love virtually all the songs. the weakest being "That Don't Make it Junk" & "The LAnd Of Plenty". Although the 2 weakest tracks imo, they are alright. All other tracks are fantastic. Love his voice here with the girl background singers & the production is great! A+ 10+. "Here It Is", Alexandria Leaving" "A Thousand Kisses Deep", "By The Rivers Dark", "Boogie Street", "In MY Secret Life" Wow!! An Overall top 5 album in my vast vast library. MEZ

Your feedback for Ten New Songs