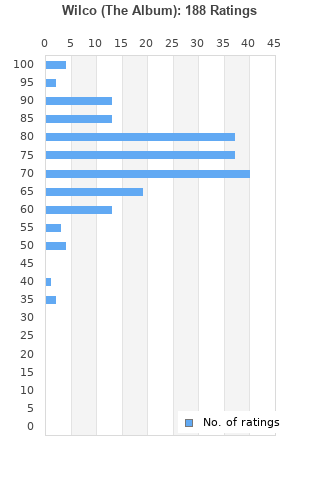 Wilco (The Album) by Wilco (CD, Jun-2009, Nonesuch (USA)) SEALED (14)
Condition: Brand New
Time left: 12h 16m 5s
Ships to: Worldwide
$6.98
Go to store
Product prices and availability are accurate as of the date indicated and are subject to change. Any price and availability information displayed on the linked website at the time of purchase will apply to the purchase of this product.  See full search results on eBay

Wilco (The Album) is ranked 9th best out of 18 albums by Wilco on BestEverAlbums.com.

The best album by Wilco is Yankee Hotel Foxtrot which is ranked number 48 in the list of all-time albums with a total rank score of 26,100. 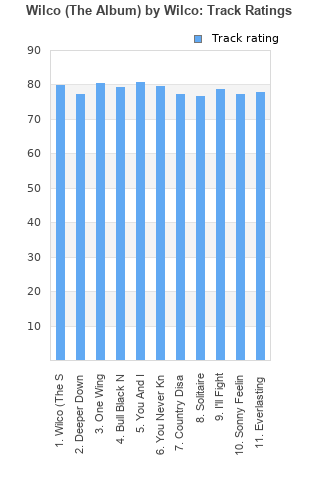 Rating metrics: Outliers can be removed when calculating a mean average to dampen the effects of ratings outside the normal distribution. This figure is provided as the trimmed mean. A high standard deviation can be legitimate, but can sometimes indicate 'gaming' is occurring. Consider a simplified example* of an item receiving ratings of 100, 50, & 0. The mean average rating would be 50. However, ratings of 55, 50 & 45 could also result in the same average. The second average might be more trusted because there is more consensus around a particular rating (a lower deviation).
(*In practice, some albums can have several thousand ratings)
This album is rated in the top 24% of all albums on BestEverAlbums.com. This album has a Bayesian average rating of 74.6/100, a mean average of 74.3/100, and a trimmed mean (excluding outliers) of 74.7/100. The standard deviation for this album is 10.3.

I started to get this Willie Nelson meets Phish feeling, and then sometimes a George Harrison and John Lennon sound from the keys, vocals, and guitar. But still just ok.

Wilco's weakest album. Pretty good songs, but far less interesting than any of their previous albums. Fortunately, The Whole Love suggests they're moving back in a more promising direction.

Wilco's weakest, but still better than most other bands. This is their least memorable, but One Wing and I'll Fight are fantastic.

I generally consider Wilco an overrated band that never recaptures the musical joy and richness of YHF. This is the closest they have come (imho) with Bull Black Nova, You Never Know, I'll Fight and the beautiful duet You and I all very worthwhile songs.

Wilco still can produce solid albums. "sky blue sky" might've felt generic when compared to the experimentalism of their past, but sky blue sky still presented some interesting guitar textures from new-ish member Nels Cline. "wilco (the album)" has even less experimentalism than sky blue "sky and is saved" by the playful humor of "wilco (the song)", the "trick of the tail"-sounding guitars of "deeper down", the breezy piano offing "you never know" and the old-school-wilco "bull black nova". I'm both attracted to and repelled by the 80s-cheese-duet-sounding "you and I" featuring feist (a throwaway track). The rest is "just good Wilco".

Your feedback for Wilco (The Album)