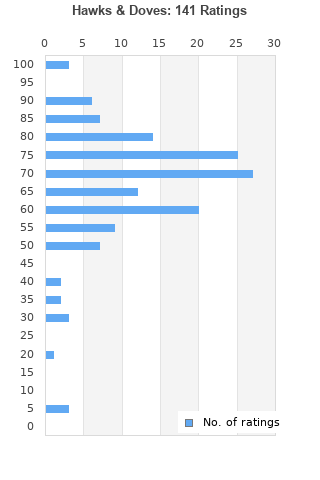 Neil Young ‎ ~ Hawks & Doves ~ Vintage LP Reprise Records HS 2297
Condition: Used
Time left: 5h 11m 5s
Ships to: Worldwide
$8.30
Go to store
Product prices and availability are accurate as of the date indicated and are subject to change. Any price and availability information displayed on the linked website at the time of purchase will apply to the purchase of this product.  See full search results on eBay

Hawks & Doves is ranked 17th best out of 77 albums by Neil Young on BestEverAlbums.com.

The best album by Neil Young is After The Gold Rush which is ranked number 76 in the list of all-time albums with a total rank score of 19,346. 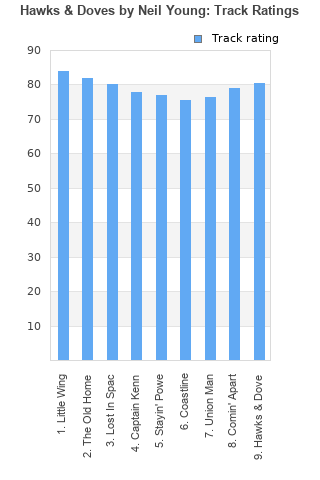 Rating metrics: Outliers can be removed when calculating a mean average to dampen the effects of ratings outside the normal distribution. This figure is provided as the trimmed mean. A high standard deviation can be legitimate, but can sometimes indicate 'gaming' is occurring. Consider a simplified example* of an item receiving ratings of 100, 50, & 0. The mean average rating would be 50. However, ratings of 55, 50 & 45 could also result in the same average. The second average might be more trusted because there is more consensus around a particular rating (a lower deviation).
(*In practice, some albums can have several thousand ratings)
This album has a Bayesian average rating of 69.2/100, a mean average of 67.3/100, and a trimmed mean (excluding outliers) of 68.8/100. The standard deviation for this album is 16.9.

The first four songs are very enjoyable and stand up to Neil Young's lesser 70s stuff, but the last half of record is easily forgettable and not really worth a deeper listen. He gets much worse in the 80s though.

The first half is fine albeit a little flat, but for the second half of the album the music descends into a series of strange throwaway country doodles. Without doubt an album of two halves.

It's hard to follow up a record as good as "Rust Never Sleeps". Mr. Young produced a solid album with this one, not a classic but a good collection of songs.

Great album for Neil Young fanboys!!! Not a classic but extremely enjoyable and the second half is quite fun.

Lot of ny fans don't rate this. Not sure why as its not a big departure from his classic sound and there's some great tracks on here. Not a classic by his standards but good solid album. He's made a lot worse.

There are so many good Neil Young albums, but for me, this one rings the most true, the themes, arrangements, music, band, all seem to gel so well...my favorites, "Coming apart at every nail", and "Little Wing". Came on the heels of "Rust never sleeps" which was huge...everyone hated this...too populist, I imagine.

Your feedback for Hawks & Doves