Other Voices (studio album) by The Doors 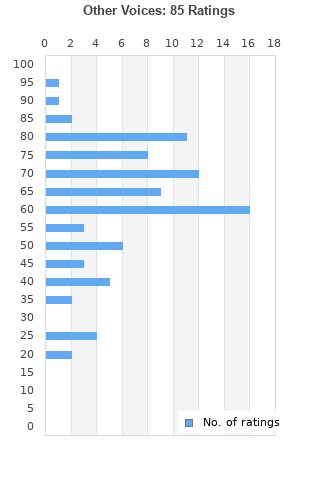 Other Voices is ranked 20th best out of 42 albums by The Doors on BestEverAlbums.com.

The best album by The Doors is The Doors which is ranked number 29 in the list of all-time albums with a total rank score of 35,821. 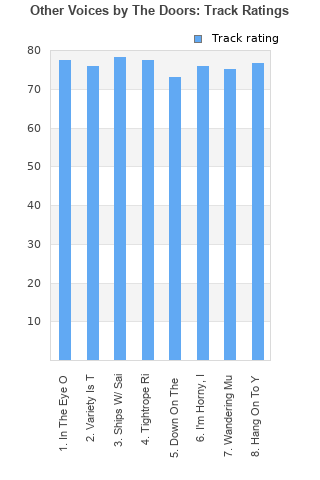 Rating metrics: Outliers can be removed when calculating a mean average to dampen the effects of ratings outside the normal distribution. This figure is provided as the trimmed mean. A high standard deviation can be legitimate, but can sometimes indicate 'gaming' is occurring. Consider a simplified example* of an item receiving ratings of 100, 50, & 0. The mean average rating would be 50. However, ratings of 55, 50 & 45 could also result in the same average. The second average might be more trusted because there is more consensus around a particular rating (a lower deviation).
(*In practice, some albums can have several thousand ratings)
This album has a Bayesian average rating of 63.4/100, a mean average of 62.0/100, and a trimmed mean (excluding outliers) of 62.0/100. The standard deviation for this album is 17.6.

Interesting to hear doors music with no Jim Morrison. Torn on this one.

So boring and unnecessary. It just sounds so bland, like they would have never grown out of 1967 without Morrison's leadership.


The songs are good, the voice of Ray Manzarek is really amazing (Robby Krieger songs are weaker), if it had been released under the name of another band would probably give a 95/100! But in fact, when I listen to The Doors I just want a trip guided by the dark voice of Jim Morrison

Not a terrible album. Still sounds Doors(y)... Just doesn't quite feel the same without Jim.

Actually a lot better than you would think their first album without Jim Morrison would be.

A forgotten treasure. Tightrope Ride, Down on the Farm and Variety is the Spice of Life are up there with the best songs they ever did.

A great album. Almost a who needed Jim anyway statement. Like Tool, the three members of the Doors were making the music and waiting on their front man to jump in and fill the voice in. Nearly as good as L.A. Woman. Better than the other five (ok maybe not the first). A hidden treasure.

not as bad as everybody claims... Down with mythology, I actually like the fact that it lacks that peculiar Morrison aura I have luckily grown out of while not losing the fine Doors musicianship. The next one (Full Circle) has its ugly lows but I can proudly state that I prefer Other Voices over the sameness in the soundscape of the debut album. Ha!

Your feedback for Other Voices