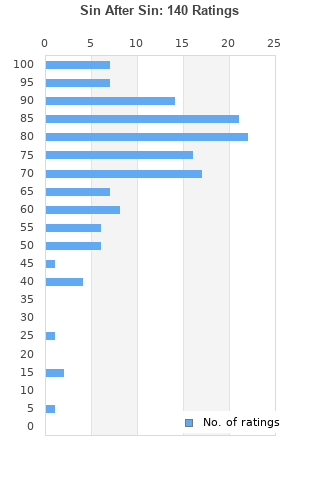 Judas Priest Sin After Sin CD CK 86183
Condition: Very Good
Time left: 11h 8m 26s
Ships to: Worldwide
$8.50
Go to store
Product prices and availability are accurate as of the date indicated and are subject to change. Any price and availability information displayed on the linked website at the time of purchase will apply to the purchase of this product.  See full search results on eBay

Sin After Sin is ranked 8th best out of 26 albums by Judas Priest on BestEverAlbums.com.

The best album by Judas Priest is British Steel which is ranked number 1336 in the list of all-time albums with a total rank score of 1,306. 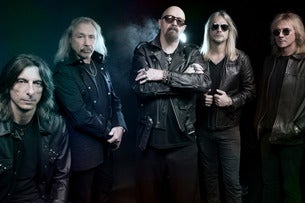 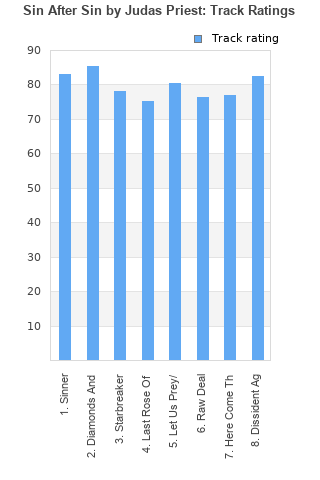 Rating metrics: Outliers can be removed when calculating a mean average to dampen the effects of ratings outside the normal distribution. This figure is provided as the trimmed mean. A high standard deviation can be legitimate, but can sometimes indicate 'gaming' is occurring. Consider a simplified example* of an item receiving ratings of 100, 50, & 0. The mean average rating would be 50. However, ratings of 55, 50 & 45 could also result in the same average. The second average might be more trusted because there is more consensus around a particular rating (a lower deviation).
(*In practice, some albums can have several thousand ratings)
This album is rated in the top 14% of albums on BestEverAlbums.com. This album has a mean average rating of 74.0/100. The trimmed mean (excluding outliers) is 75.4/100. The standard deviation for this album is 16.9.

From Syrinx 4 days ago

Terrific album I’ve owned since the early 80s. Has concert staples such as Sinner and Diamonds and Rust (Joan Baez cover). Has the wonderful ballad Last Rose of Summer coupled with the proto-thrash metal Dissident Aggressor.
I’d say this album, along with Sad Wings, is a must in anyone’s collection.

My favourtie priest album, why? Well because it mixes the 70s rock with the soon to be NWOBH sound. It's just so good.

To back up what PTLegz said.. there is no way there are 10 Priest albums better than this one. This features some of the most exciting songwriting and arranging in the Priest catalog as well as some phenomenal drumming from the legendary Simon Phillips. This to me is the culmination of Priest.

One of Priest's best, Dissident Aggressor is my favourite, but there are no weak tracks.

Essential Priest! Part of their golden years (Sad Wings - Hell Bent For Leather) before they decided to dumb down their lyrics.

No way in hell are there nine Priest albums better than this one.

I am currently listening this album right now and it is blowing my head (again!!!)

Mostly good stuff. Diamonds and Dust and Last Rose Of Summer were highlights for me.

Your feedback for Sin After Sin