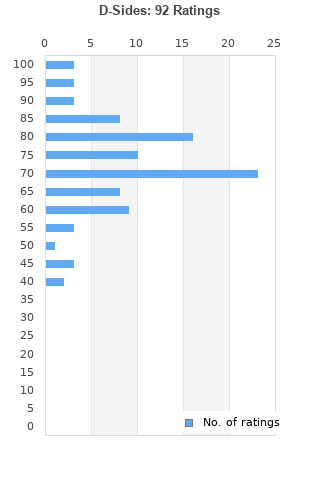 D-Sides is ranked 8th best out of 12 albums by Gorillaz on BestEverAlbums.com.

The best album by Gorillaz is Demon Days which is ranked number 128 in the list of all-time albums with a total rank score of 12,996. 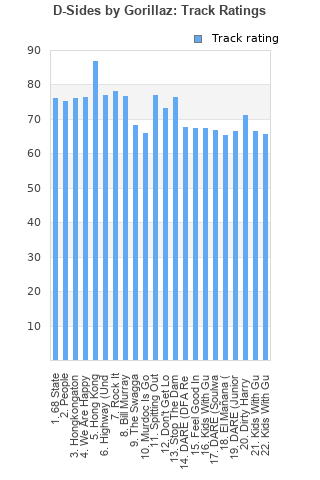 Rating metrics: Outliers can be removed when calculating a mean average to dampen the effects of ratings outside the normal distribution. This figure is provided as the trimmed mean. A high standard deviation can be legitimate, but can sometimes indicate 'gaming' is occurring. Consider a simplified example* of an item receiving ratings of 100, 50, & 0. The mean average rating would be 50. However, ratings of 55, 50 & 45 could also result in the same average. The second average might be more trusted because there is more consensus around a particular rating (a lower deviation).
(*In practice, some albums can have several thousand ratings)
This album has a Bayesian average rating of 72.0/100, a mean average of 71.9/100, and a trimmed mean (excluding outliers) of 71.9/100. The standard deviation for this album is 12.8.

If you take out all the remixes, then this is one of the best Gorillaz albums.

It's very very good! Better than I expected. Darker and trippy, which is great in my book. This and self titled are my favorite.

This album is absolutely FANTASTIC if you take out the remixes. I don't count them as part of the album. To me, this is probably my 2nd favorite Gorillaz album. I know that Demon Days is a generic choice for favorite Gorillaz album but it's one of the most consistent albums that I've heard. Every track on Demon Days is outstanding, and so are its b-sides. This album shares an almost equal consistency, although there a couple of very slightly weak tracks. Also, this album FLOWS seriously well, and it doesn't seem like a compilation, it feels like a complete ALBUM. Maybe it's just because Phase 2 was just amazing in general. Even though I prefer Demon Days, I sometimes prefer the atmosphere of this album. I love the different styles of music here. It sort of has that experimental feeling of Self-Titled, but I feel like the production is smoother, and the instrumentation is more complex. Some of these songs are absolute gems, specifically Highway Under Construction, Hong Kong, Rockit, Stop the Dams, 68 State, Spitting Out the Demons, Hongkongaton, and Bill Murray.

Some of the remixes are filler but overall it is fantastic album. Songs like Highway (Under construction) or Spitting out the demons are one of their best.

What can I say besides Hong Kong.

It's a masterpiece. I may be a bit biased, seeing as Demon Days is my favourite album, and this is the B-sides from those sessions, but MAN do I love Hong Kong.

This album is great, not because of its flow, but because of its material. Ignoring the fillers and the horrible remixes, you have Hong Kong (±aton), Happy Landfill, Rock It, Bill Murray, Spitting Out the Demons, and Stop the Dams. Every bit of those songs is better than the entirety of their debut, and some are even worthy of the album the sessions produced.

If only Hong Kong was on Demon Days, if only...

About as good as an album of b-sides (sorry, D-sides) can be. There's a lot of filler and re-imaginations from Demon Days on here, like People which is an alternate take on DARE without Shaun Ryder. There are some really good songs in this release though. Hong Kong is the main standout. It probably deserved to be on a proper album, but resides here. Hong Kong was used to perfection during the encore of the Demon Days Live shows. Other good original songs include the instrumental opener 68 state and the hilariously trite Murdoc is God. Recommended for a one-off listen and to salvage Hong Kong if nothing else.