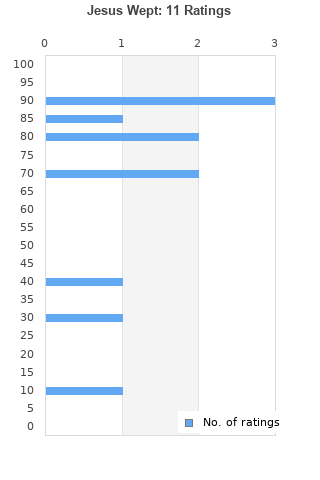 Pm Dawn - Jesus Wept - Pm Dawn CD F3VG The Fast Free Shipping
Condition: Very Good
Time left: 7d 10h 27m 45s
Ships to: Worldwide
$12.97
Go to store
Product prices and availability are accurate as of the date indicated and are subject to change. Any price and availability information displayed on the linked website at the time of purchase will apply to the purchase of this product.  See full search results on eBay

Jesus Wept is ranked 3rd best out of 5 albums by P.M. Dawn on BestEverAlbums.com.

The best album by P.M. Dawn is Of The Heart, Of The Soul And Of The Cross: The Utopian Experience which is ranked number 5070 in the list of all-time albums with a total rank score of 262. 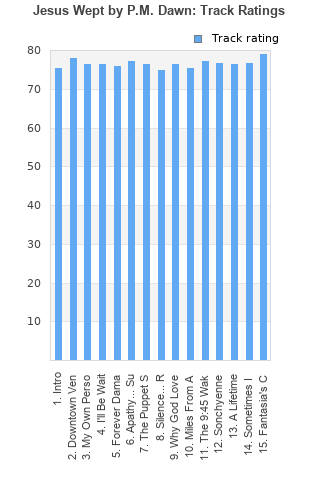 0
14.
Sometimes I Miss You So Much (Dedicated To The Christ Consciousness)
Rating: 77 (1 vote)Comments:

Rating metrics: Outliers can be removed when calculating a mean average to dampen the effects of ratings outside the normal distribution. This figure is provided as the trimmed mean. A high standard deviation can be legitimate, but can sometimes indicate 'gaming' is occurring. Consider a simplified example* of an item receiving ratings of 100, 50, & 0. The mean average rating would be 50. However, ratings of 55, 50 & 45 could also result in the same average. The second average might be more trusted because there is more consensus around a particular rating (a lower deviation).
(*In practice, some albums can have several thousand ratings)
This album has a Bayesian average rating of 70.9/100, a mean average of 68.5/100, and a trimmed mean (excluding outliers) of 68.5/100. The standard deviation for this album is 25.9.

I prefer this incarnation of P.M. Dawn to the material found on earlier albums - more focused on singing vs. rapping. The subject matter remains virtually unchanged, focusing on empowerment and philosophizing. The closing medley is infectious, featuring total reworkings of Prince and the Revolution's "1999", Talking Heads' "Once In A Lifetime" and Nilsson's "Coconut".

Downtown Venus and 945 are 2 of the best tracks they ever did. After that, they pretty much lose me on this one.

They continue their highly-philosophical-r&b/hip-hop-to-the-brink-of-obfuscation music from "this bliss album" with the only modification unfortunately being less rapping. I like Prince Be's delivery, but he chose to appeal to a broader audience...all while musing on his own personal gravity, christ consciousness and grooving in "downtown venus". Think of a more instrospective and philosophical de la soul and you have an idea. The "fantasia" covers medley is also pretty hot.

Your feedback for Jesus Wept