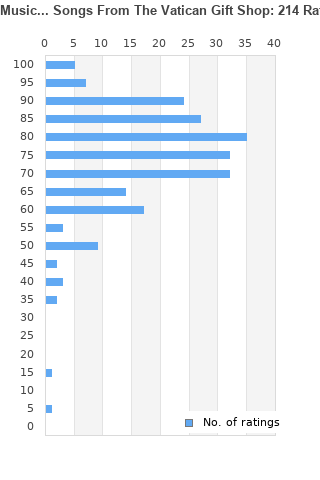 Tiny Music...Songs from the Vatican Gift Shop by Stone Temple Pilots Grunge
Condition: Very Good
Time left: 19h 27m 26s
Ships to: Worldwide
$2.50
Go to store
Product prices and availability are accurate as of the date indicated and are subject to change. Any price and availability information displayed on the linked website at the time of purchase will apply to the purchase of this product.  See full search results on eBay

Tiny Music... Songs From The Vatican Gift Shop is ranked 3rd best out of 10 albums by Stone Temple Pilots on BestEverAlbums.com.

The best album by Stone Temple Pilots is Purple which is ranked number 676 in the list of all-time albums with a total rank score of 2,816.

Listen to Tiny Music... Songs From The Vatican Gift Shop on YouTube 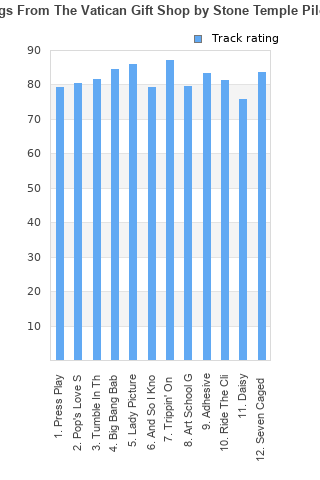 Rating metrics: Outliers can be removed when calculating a mean average to dampen the effects of ratings outside the normal distribution. This figure is provided as the trimmed mean. A high standard deviation can be legitimate, but can sometimes indicate 'gaming' is occurring. Consider a simplified example* of an item receiving ratings of 100, 50, & 0. The mean average rating would be 50. However, ratings of 55, 50 & 45 could also result in the same average. The second average might be more trusted because there is more consensus around a particular rating (a lower deviation).
(*In practice, some albums can have several thousand ratings)
This album is rated in the top 19% of all albums on BestEverAlbums.com. This album has a Bayesian average rating of 74.7/100, a mean average of 74.4/100, and a trimmed mean (excluding outliers) of 74.8/100. The standard deviation for this album is 14.3.

While I liked Core and loved Purple, this is the STP album that I find myself listening to over and over.
They grew out of the grunge sound and developed creatively into their own sound. Guitarist Dean DeLeo
really shines.
Favorite Tracks: Trippin On a Hole in a Paper Heart, Big Bang Baby, Lady Picture Show, Daisy
and the brilliant And So I Know.
Only track I don't care for is Art School Girl.

Tiny Music was met with some criticism for the new sound upon release, but the album's sound has been re-tagged as a fresh new sound. Core and Purple were barely different that other 90's rock bands. They were just better than most, but Tiny Music is a more eccentric and artistic album. If STP released another Core, the style would have been tiring.

This album is a ‘little’ gem and in my opinion enhances Weiland’s legacy as a pioneering progressive artist. I don’t think it challenges Purple but I think it surpasses Core as an artistic statement. I agree with the comment below in regards to initially being disappointed upon its release. I was hoping that the quality of Purple would flow into the new release. Instead we had to wrap our musical minds around a very different style which required many listens before we were well enough acquainted. Tiny Music is to Purple what Currents is to Lonerism.

A good, easy listen for a mostly rough sounding band

Less rock and more just, how do I explain it... ART, from this record.

Good alternative rock/psychedelic rock/neo-psychedelia album. Best 10 songs average is 84,2/100 and the album can get good 85/100. It's hard to nominate a best song. Most songs are good 85/100, but no hit contained. Unfortunately far away from predecessors "Core" and "Purple".

Tiny Music is one of the most inventive, fresh & arty fun pop metal albums ever, and I'd bet serious recs that it influenced Homme in the making of QOTSA's Rated R.

I HATED this album when it first came out. I was infatuated with what STP had done with Core and Purple, and I wasn't ready for this shift. You can hear Scott Weiland's drug addiction all over this album. It's bizarre and disjointed. However, listening to it now, I see the quality. The boys in the band have never grooved like they did on this album, as they tackle more challenging tracks. It's funky and saucy, and yes, a little weird, but it works. Not as consistent as Core or Purple, but I'm glad they pushed themselves.

This is a good album with a lot of good songs, but it has this poppier sound that keeps it from being on the same level as the first two.

At one time my fav album of 1996 (still top 5). No one songs really jumps out, if any it would be 'Trippin on a hole...' but I considered it to be a psychedelic masterpiece of the 90's. Start by how the 1st track suggests and 'Press play' and listen to it thru the end, as a whole it's far out with it's mood swings.

Your feedback for Tiny Music... Songs From The Vatican Gift Shop