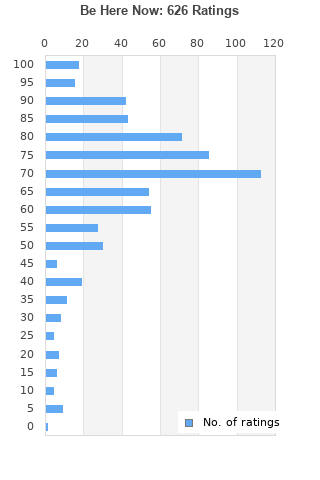 Be Here Now is ranked 3rd best out of 13 albums by Oasis on BestEverAlbums.com.

The best album by Oasis is (What's The Story) Morning Glory? which is ranked number 57 in the list of all-time albums with a total rank score of 21,467. 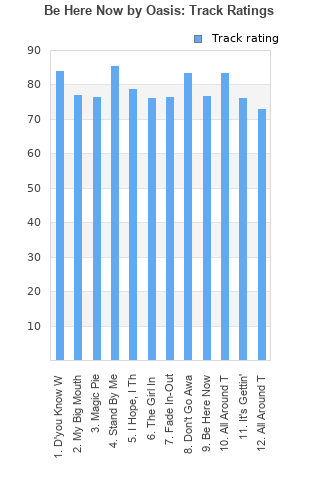 Rating metrics: Outliers can be removed when calculating a mean average to dampen the effects of ratings outside the normal distribution. This figure is provided as the trimmed mean. A high standard deviation can be legitimate, but can sometimes indicate 'gaming' is occurring. Consider a simplified example* of an item receiving ratings of 100, 50, & 0. The mean average rating would be 50. However, ratings of 55, 50 & 45 could also result in the same average. The second average might be more trusted because there is more consensus around a particular rating (a lower deviation).
(*In practice, some albums can have several thousand ratings)
This album has a Bayesian average rating of 69.1/100, a mean average of 67.5/100, and a trimmed mean (excluding outliers) of 69.0/100. The standard deviation for this album is 19.2.

Spent £16 on the CD on the release date (£2,000 in today’s money) and we tried to convince ourselves it was the greatest album ever. Alan McGee clutched straws be telling fans it was an album to be ‘played as loud as possible’. A whole generation of Oasis fans were left deaf by the 67th minute. Tinnitus troubling stuff.

Don't really understand why this is much maligned. Obviously not as good as their first two albums, but certainly not a bad album. Only gripe is it's a little too long. All Around the World is a good song but there's no need for it to be 9 minutes long. My favourites on the album are I Hope I Think I Know and Don't Go Away.

This is definitely the start of the end for Oasis. They seem to have lost their spark and their edge on the songs and there is such a large amount of filler and weak tracks on here. It is such a bloated release as well with it coming in at around an hour and 11 minutes with some songs being stretched to their limit and not in a good way. The production is pretty poor and the music sounds like a mess half the time. You lose some instruments in places and it is tough to even see what they are going for on some songs. There are some positives like a few exceptional tracks but they really are diamonds in the rough. They demonstrate that they could still create amazing things but external factors are stopping them from doing it. Overall, this is a pretty poor record and is quite a mess in my opinion.

I really liked them at the time and saw them live, but this album was a bit like their star beginning to fade. Still some fine tracks

I have never tried cocaine but this album makes me wonder if I should.
An interminable mess with so much energy and grandiosity that I can’t help but find it endearing.
It has past the point of being a guilty pleasure, it’s now just orgasmic.

As pretty much everyone has already pointed out, the length of the songs is the main reason that holds this album back.

Damn. This album is a mess. The songs all have unbelievable potential and they ARE good songs, but most are way too long and the production is pretty bad. This album could use a serious remix, though it will never happen. Pretty unfortunate, still biblical.

Probably the most disappointed I've ever been in a record when it first came out. I don't mind long songs but every one of these overstays its welcome and as a result Be Here Now is a chore to get through. There are good songs like Stand By Me and D'You Know What I Mean is not bad but there is a lot of crap on this album. One thing I do like is Liam's voice. It's much deeper and raspier, like his live voice, and it would have been really interesting had he been singing like this during the first two albums when his brother was giving him quality songs to sing.

As an album though: this is pretty crap. But that's just my opinion.

Not a good follow-up to What's The Story (Morning Glory). You can tell they started to hate each other at this point.

Your feedback for Be Here Now