Coming Up (studio album) by Suede 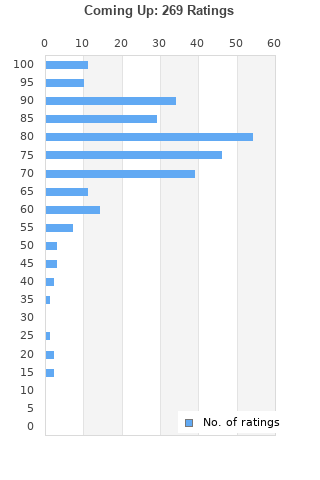 Coming Up is ranked 3rd best out of 17 albums by Suede on BestEverAlbums.com.

The best album by Suede is Dog Man Star which is ranked number 465 in the list of all-time albums with a total rank score of 4,022. 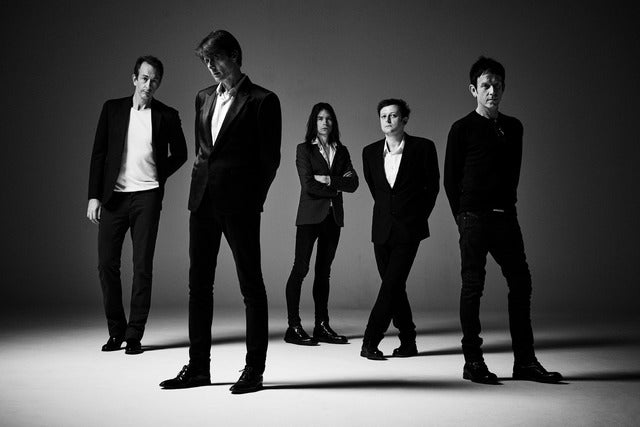 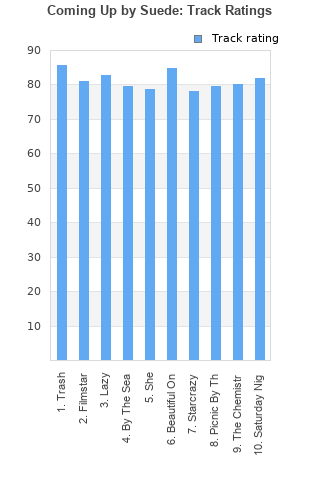 Rating metrics: Outliers can be removed when calculating a mean average to dampen the effects of ratings outside the normal distribution. This figure is provided as the trimmed mean. A high standard deviation can be legitimate, but can sometimes indicate 'gaming' is occurring. Consider a simplified example* of an item receiving ratings of 100, 50, & 0. The mean average rating would be 50. However, ratings of 55, 50 & 45 could also result in the same average. The second average might be more trusted because there is more consensus around a particular rating (a lower deviation).
(*In practice, some albums can have several thousand ratings)
This album is rated in the top 4% of all albums on BestEverAlbums.com. This album has a Bayesian average rating of 77.2/100, a mean average of 76.2/100, and a trimmed mean (excluding outliers) of 77.3/100. The standard deviation for this album is 14.4.

Another strong album from Suede, they really were up there with the best of the Brits in the 90s but sadly too often get overlooked in the 2020s. The Chemistry Between Us is just so beautifully sad and poignant, brings back so many wonderful memories. One of Suede's greatest songs from their third consecutive excellent album.

Played it for the first time on its 25th anniversary, how I have missed out on this one! Complete Bowie homage and very enjoyable.

In the 90’s there was a Britpop war going on. You had two album wonders Oasis, there was Pulp ( I never understood the Jarvis Cocker thing), there was Blur with plenty of substance beneath the hype and of course there was the shoe gazing of Ride, Lush and MBV among many others. But there was another band, a much under appreciated band and for me they were the ones, and it’s time we looked back and acknowledged the brilliance of Suede

The run of Suede beginning with 1993’s self titled debut through ‘Dog Man Star’ and concluding with 1996’s ‘ Coming Up’ represents a three album run better than any of the Britpop heavy weights. There is something simply magical about Suedes ability to capture the pulse of the times through drugs, interesting characters and sexual ambiguity. It was and is an intoxicating mix

Bearing in mind what happened during and after Dog Man Star, it's pretty much a miracle this album exists, let alone that it is an exquisite collection of pop songs, from Trash - one of the greatest pop songs ever made - to 'Saturday Night', a wonderfully evocative and melodic piece of glam. Pop at its best.

A near perfect album with only let down for me being Picnic By The Motorway. But so many killer tracks here including Trash, Filmstar, Lazy, She, Beautiful Ones and Saturday Night.
Love Brett Andersons vocals throughout - might be part of the Britpop 90's but plenty homage to glam rock.

Picnic by the Motorway is one of the most criminally underrated songs ever. Give it a listen.

If you don't buy the Deluxe Edition, then you'll be missing out on "Europe Is Our Playground", one of Suede's best songs. Many of the other b-sides, including "This Time", are pretty damn good too.

Coming up, is probably Suede's most enjoyable album. It's clear that this was intended as their 'pop' record, and it's a cracking LP full of fantastically catchy songs. Beautiful ones, trash, by the sea, and, the chemistry between us, are the best songs. A hugely enjoyable record, a Saturday night album.

More of a pop album compared to the first two albums, its very good but its not as masterful as those

Your feedback for Coming Up