Singles (compilation album) by The Smiths 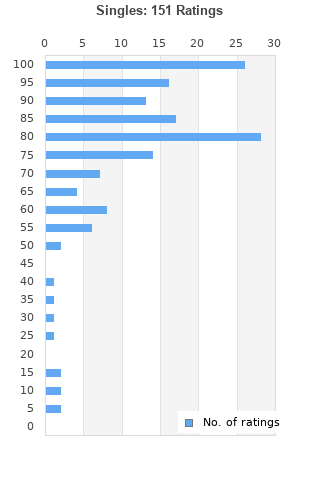 the smiths 7 inch vinyl single i started something i couldnt finish b- pretty
Condition: Used
$14.00

Singles is ranked 8th best out of 15 albums by The Smiths on BestEverAlbums.com.

The best album by The Smiths is The Queen Is Dead which is ranked number 17 in the list of all-time albums with a total rank score of 42,484. 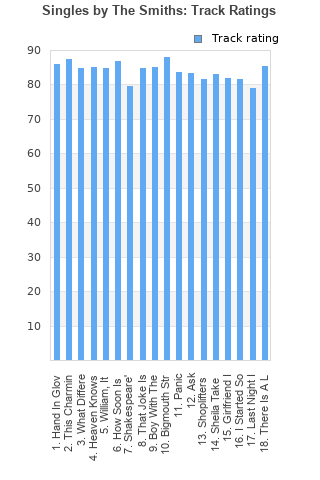 Rating metrics: Outliers can be removed when calculating a mean average to dampen the effects of ratings outside the normal distribution. This figure is provided as the trimmed mean. A high standard deviation can be legitimate, but can sometimes indicate 'gaming' is occurring. Consider a simplified example* of an item receiving ratings of 100, 50, & 0. The mean average rating would be 50. However, ratings of 55, 50 & 45 could also result in the same average. The second average might be more trusted because there is more consensus around a particular rating (a lower deviation).
(*In practice, some albums can have several thousand ratings)
This album is rated in the top 1% of all albums on BestEverAlbums.com. This album has a Bayesian average rating of 81.4/100, a mean average of 79.1/100, and a trimmed mean (excluding outliers) of 82.0/100. The standard deviation for this album is 20.4.

Usually when discovering bands I'm unfamiliar with I get one of their 'Greatest Hits' albums to check them out before moving onto the studio albums if I like what I hear. Hence being the case getting this. I always appreciate a band that has it's own unique style which is what I find here. It's good but I think this'll be enough for me personally.

A collection of all The Smiths singles. Not a bad song on the album, all certified classics.

Your feedback for Singles