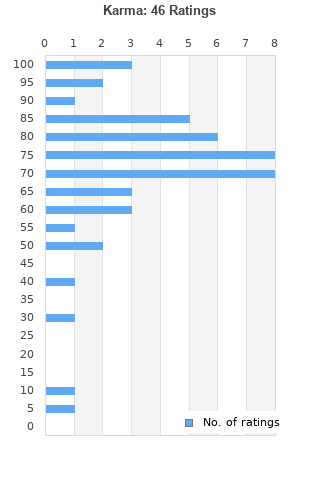 Karma is ranked as the best album by Delerium. 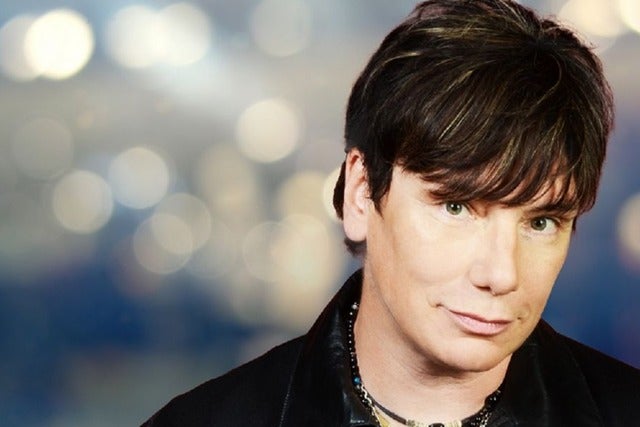 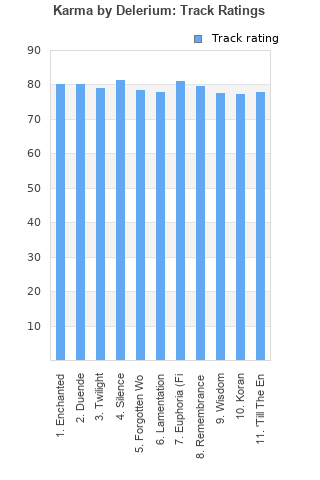 Rating metrics: Outliers can be removed when calculating a mean average to dampen the effects of ratings outside the normal distribution. This figure is provided as the trimmed mean. A high standard deviation can be legitimate, but can sometimes indicate 'gaming' is occurring. Consider a simplified example* of an item receiving ratings of 100, 50, & 0. The mean average rating would be 50. However, ratings of 55, 50 & 45 could also result in the same average. The second average might be more trusted because there is more consensus around a particular rating (a lower deviation).
(*In practice, some albums can have several thousand ratings)
This album has a mean average rating of 71.0/100. The trimmed mean (excluding outliers) is 72.9/100. The standard deviation for this album is 20.4.

Magnificent album that demands several listens to get the full grasp of it's power and beauty. A Canadian project that formed in the late 80's headed by Bill Leeb and Rhys Fulber, Delerium had gone through several transitions over the years but 1997's "Karma" could very well be their greatest achievement. Also, 1994's "Semantic Spaces" and "Poem" from 2000 are also highly recommended albums from yours truly.

It's hard to believe this band is still unknown. Delerium has gone through many transitions throughout the years. From 1989 to 1994 their work was extremely atmospheric with almost no lyrics at all. This music is good in small doses, but without any lyrics and so many similar sounding songs I found the albums tiring fast. In 2001 Delerium switched to more mainstream pop. Their album Karma was released in the middle right between their last and best ambient album and their first and best pop album giving us a strange mix of atmosphere and poetry I haven't seen with anything else since.

Your feedback for Karma