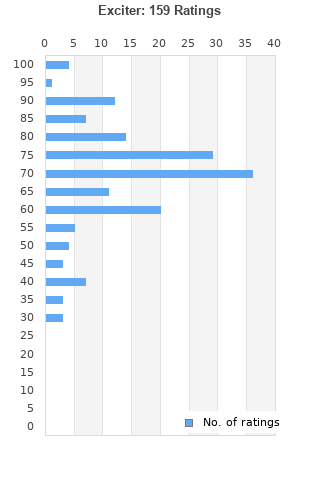 Exciter is ranked 14th best out of 42 albums by Depeche Mode on BestEverAlbums.com.

The best album by Depeche Mode is Violator which is ranked number 119 in the list of all-time albums with a total rank score of 13,627. 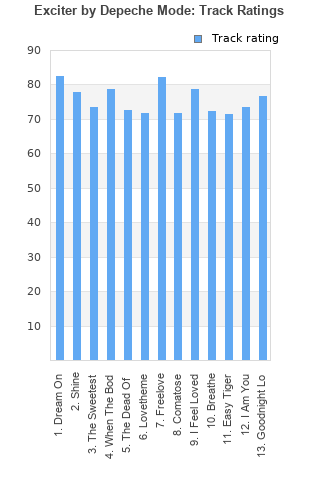 Rating metrics: Outliers can be removed when calculating a mean average to dampen the effects of ratings outside the normal distribution. This figure is provided as the trimmed mean. A high standard deviation can be legitimate, but can sometimes indicate 'gaming' is occurring. Consider a simplified example* of an item receiving ratings of 100, 50, & 0. The mean average rating would be 50. However, ratings of 55, 50 & 45 could also result in the same average. The second average might be more trusted because there is more consensus around a particular rating (a lower deviation).
(*In practice, some albums can have several thousand ratings)
This album has a Bayesian average rating of 69.3/100, a mean average of 69.0/100, and a trimmed mean (excluding outliers) of 69.0/100. The standard deviation for this album is 14.9.

With the exception of "Dream on", Exciter fails to have anything really memorable about it.

Exciter, is probably the first Depeche Mode album where there isn't a killer single to go along with it. Dream on, shine, and, freelove, are the easily the strongest tracks, but they certainly aren't up there with their best 45's. Still, it's more consistent than, ultra, but it does feel a little overlong. Ten tracks would have been perfect, and probably would have been in the eighties, but in the CD age albums have to be around an hour long, and that leaves too much filler. This record is a perfect example of that.

Not a great album, but I do really like Shine.

Agree with Bach, and for me it's also the band's most progressive and most soulful album. Electronica is rarely as beautiful as 'When The Body Speaks' or as comforting as 'Goodnight Lovers'.

Their most underrated album.
Best tracks: Freelove, I Feel Loved, When the Body Speaks, Breathe.

It's just a little dull. None of the songs really jump out at me. I remember being pretty disappointed by this at the time.

Mostly follows in the template set by "Ultra" (which is basically what they've been rehashing since). "dream on" and "shine" is a nice 1-2 punch to open the album. "the dead of night" is a fun, siren-inflected romp that unfortunately blunts its own momentum. A couple of other good ideas on here, but the "Ultra" template (since) has become staid for me.

Your feedback for Exciter