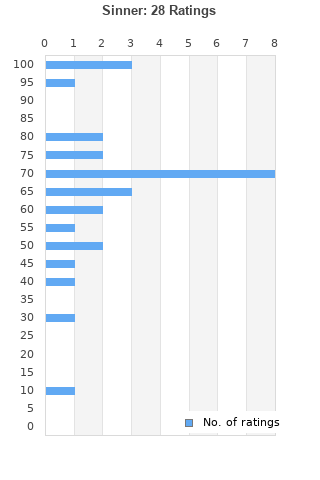 Sinner is ranked as the best album by Drowning Pool. 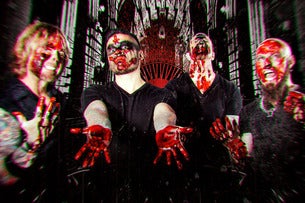 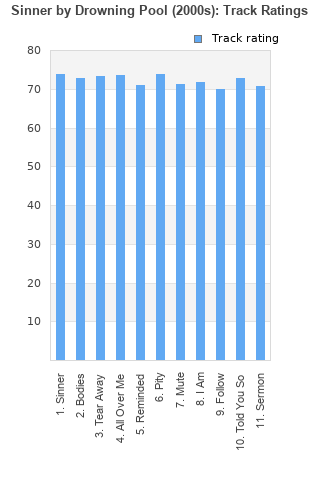 Rating metrics: Outliers can be removed when calculating a mean average to dampen the effects of ratings outside the normal distribution. This figure is provided as the trimmed mean. A high standard deviation can be legitimate, but can sometimes indicate 'gaming' is occurring. Consider a simplified example* of an item receiving ratings of 100, 50, & 0. The mean average rating would be 50. However, ratings of 55, 50 & 45 could also result in the same average. The second average might be more trusted because there is more consensus around a particular rating (a lower deviation).
(*In practice, some albums can have several thousand ratings)
This album has a Bayesian average rating of 68.8/100, a mean average of 67.0/100, and a trimmed mean (excluding outliers) of 67.0/100. The standard deviation for this album is 20.0.

Pretty alright album here. A lot of good stuff. Top tracks for me are Pity and Tear Away. It's a heavy rock/metal album of the disturbed mold. Probably better than most disturbed in my opinion. Worth a listen for sure.

This album has quite some interesting songs (To say I've only just bought this album today) and I wouldn't say it's as good as Disturbed's the sickness, but I do enjoy the song ''Bodies'', other songs such as Reminded, Sinner, Tear Away, etc are also good, there should be more votes on these songs (and the album itself of course) because it's quite decent to listen to.
NOTE: The ratings of the songs and the album of course, could change.

So I haven't listen to much of this album, and clearly others on this site haven't either, or at least didn't rate it. So Ill just say the song "Tear Away" is amazing and leave it at that.

Your feedback for Sinner