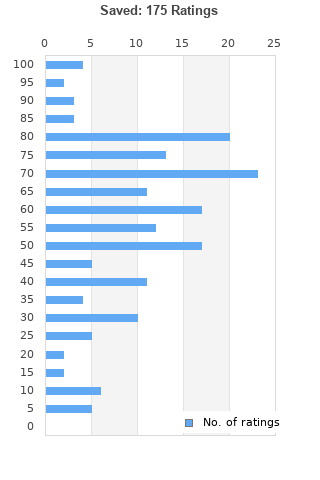 Saved is ranked 36th best out of 75 albums by Bob Dylan on BestEverAlbums.com.

The best album by Bob Dylan is Highway 61 Revisited which is ranked number 26 in the list of all-time albums with a total rank score of 35,205. 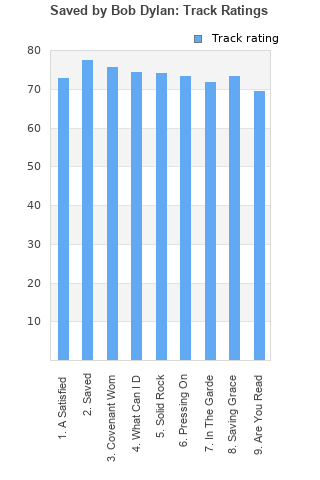 Rating metrics: Outliers can be removed when calculating a mean average to dampen the effects of ratings outside the normal distribution. This figure is provided as the trimmed mean. A high standard deviation can be legitimate, but can sometimes indicate 'gaming' is occurring. Consider a simplified example* of an item receiving ratings of 100, 50, & 0. The mean average rating would be 50. However, ratings of 55, 50 & 45 could also result in the same average. The second average might be more trusted because there is more consensus around a particular rating (a lower deviation).
(*In practice, some albums can have several thousand ratings)
This album has a Bayesian average rating of 57.8/100, a mean average of 56.9/100, and a trimmed mean (excluding outliers) of 56.9/100. The standard deviation for this album is 22.5.

Not as pleasantly surprising as its predecessor, but still not a bad album at all. Standouts are the title track, Solid Rock and Pressing On.

This is much better than the low rating given on this website. It is not for everyone as it is the most overtly religious of the Christian trilogy but I thoroughly enjoy especially A Satisfied Mind, Saved, Solid Rock and Pressing On.

This album, the second in Dylan's god trilogy, gets a really bad reputation. It's hard to see why, because this is a wonderful gospel rock album. I can only think that the over religious lyrics, and maybe the record cover too, are the reasons for this and not so much the music. Musically, it opens deceptively with the acoustic take on, satisfied mind. It the hits it's true stride with the energetic title track. Solid rock has a similar feel. There's a few decent ballads on there such as, in the garden, and, saving grace. Best of the bunch though is the wonderful, pressing on. You simply cannot fail to be uplifted by this song, it's great. If you've avoided this album up to now, due to it's reputation, give it a go, you might be pleasantly surprised. Very good.

I am not a religious person but I think this is a highly underrated record. The arrangements are incredible and the band is fantastic. Taken on it's musical merits alone this album rocks. You may not agree with what he is saying but you have to give him credit for having the balls to say it.

I still gave this a 50 because, as always, the music is fantastically arranged, but GOD these lyrics are a complete joke. Considering one of the world's greatest poets decided to make an album consisting of cliche religious flash words and phrases you can hear at any Sunday mass, I would consider a 50 incredibly generous.

Are you kidding me, Zimmerman?

I'm not religious, but this is fantastic.

Your feedback for Saved