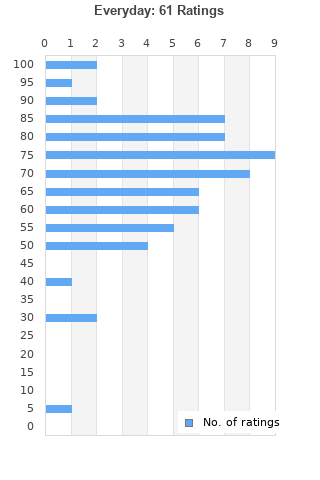 Everyday is ranked 7th best out of 60 albums by Dave Matthews Band on BestEverAlbums.com.

The best album by Dave Matthews Band is Crash which is ranked number 1543 in the list of all-time albums with a total rank score of 1,131. 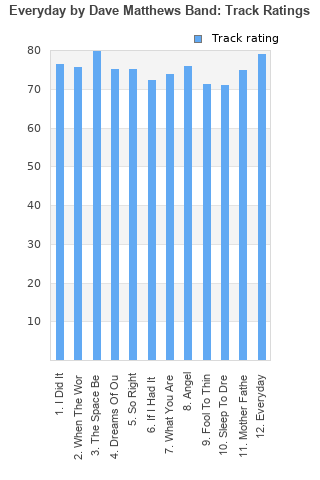 Rating metrics: Outliers can be removed when calculating a mean average to dampen the effects of ratings outside the normal distribution. This figure is provided as the trimmed mean. A high standard deviation can be legitimate, but can sometimes indicate 'gaming' is occurring. Consider a simplified example* of an item receiving ratings of 100, 50, & 0. The mean average rating would be 50. However, ratings of 55, 50 & 45 could also result in the same average. The second average might be more trusted because there is more consensus around a particular rating (a lower deviation).
(*In practice, some albums can have several thousand ratings)
This album has a Bayesian average rating of 70.5/100, a mean average of 68.9/100, and a trimmed mean (excluding outliers) of 70.0/100. The standard deviation for this album is 16.5.

Everyday gets bashed for its unabashed pop. It trades in the sax and violin jams for production sheen electric guitar.

It really isn't that bad of an album!

And understand, at the time, it was made in an effort to get Dave out of a depressed rut. Crowded Streets was dark on a macro level and LillyWhite Sessions (later to be Busted Stuff) was even darker on a personal micro level.

Youth, optimism, and the party of early DMB had passed. Dave did not like getting older and the way the world was or his place in it.

This was their "lets just make some music man"! plea with him.

It doesn't reach heights of classic Dave because at the end of the day, it doesn't really sound like anything else in their catalogue. It is a completely different turn for the band and that jarring sense takes away any chance of it being great.

The whole thing is consistently good with Sleep to Dream Her the only dud.

This was the height of their popularity. They lost loyal die hard fans because they changed their sound so much. And new fans to the new sound didn't stay long after realizing that nothing else in their catalogue sounded like this.

They were left in no man's land with a ever more depressed leader when the great Busted Stuff was made from the Lilly White Sessions. Unfortunately, not many people were left listening to take Busted Stuff in

Was it really that bad? This was a step back for DMB, but not the heaping pile of dog-poop the critics said it was.

Funny, I make all the same main points as lightmyway. His is almost a perfect summary. I hadn't read that when I wrote mine :)

This album is generally panned my fans and critics alike, sometimes vehemently. A lot of the hate, I believe, is directed toward the shift in Dave's songwriting that occurred at this time toward more pop-driven songs. This made the band less relevant as sax and violin were more often confined to token solos instead of being an integral part of the song.

This displeasure is warranted, though not a good reason to dismiss the album as a whole. There are some real gems here that get overlooked, and upon viewing lyrics critically (which is one that I didn't do at that time) they are not all bad. Fool to Think and When the World Ends are two songs which play to Dave's strength -- conveying passion, but with a perverse or self-deprecating slant. These are two of his best lyrically.

The band has noticeably exited their prime on this album. But at least Dave has yet to take his next turn as a songwriter, toward songs of bland political awareness, which anyone should admit is far worse

This is a much-hated album, and with good reason as it's very poppy compared to their other work. I think it's still very good though, a lot of these songs are just great.

Your feedback for Everyday