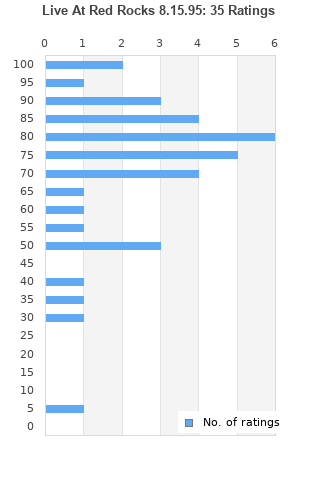 Live At Red Rocks 8.15.95 is ranked 8th best out of 60 albums by Dave Matthews Band on BestEverAlbums.com.

The best album by Dave Matthews Band is Crash which is ranked number 1446 in the list of all-time albums with a total rank score of 1,235. 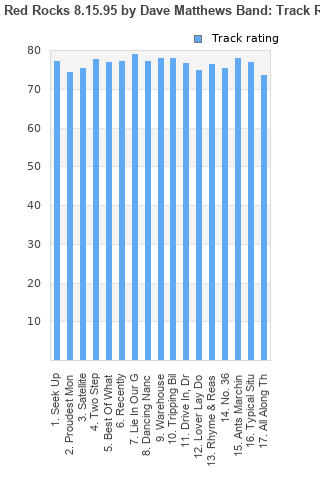 Rating metrics: Outliers can be removed when calculating a mean average to dampen the effects of ratings outside the normal distribution. This figure is provided as the trimmed mean. A high standard deviation can be legitimate, but can sometimes indicate 'gaming' is occurring. Consider a simplified example* of an item receiving ratings of 100, 50, & 0. The mean average rating would be 50. However, ratings of 55, 50 & 45 could also result in the same average. The second average might be more trusted because there is more consensus around a particular rating (a lower deviation).
(*In practice, some albums can have several thousand ratings)
This album has a Bayesian average rating of 72.8/100, a mean average of 70.7/100, and a trimmed mean (excluding outliers) of 72.7/100. The standard deviation for this album is 20.8.

Great performance, I love this album!

Mediocre pop that should crawl back under it's rock.

Full show recording featuring many of the songs off the first two albums. This is actually the album that turned me on to DMB.

Some of these versions are pretty good, but some of the don't really seem essential to me. I also don't think that they do a worthwhile version of All Along the Watchtower.

Of course, no album can ever capture the experience of seeing them live, but this is a good attempt. I wish I would have been there for this one.