ANNA (studio album) by The Courteeners 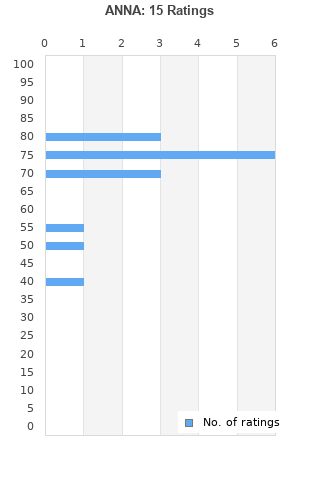 ANNA is ranked 3rd best out of 7 albums by The Courteeners on BestEverAlbums.com.

The best album by The Courteeners is St. Jude which is ranked number 10816 in the list of all-time albums with a total rank score of 105. 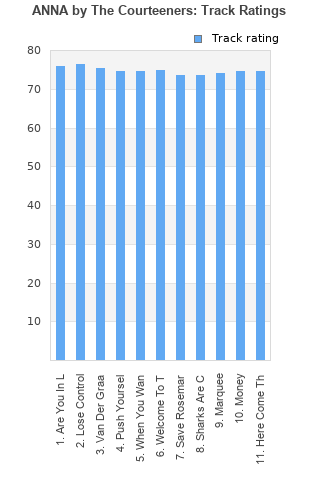 #
Track
Rating/Comments
1.
Are You In Love With A Notion?
Rating: 76 (6 votes)Comments:

Rating metrics: Outliers can be removed when calculating a mean average to dampen the effects of ratings outside the normal distribution. This figure is provided as the trimmed mean. A high standard deviation can be legitimate, but can sometimes indicate 'gaming' is occurring. Consider a simplified example* of an item receiving ratings of 100, 50, & 0. The mean average rating would be 50. However, ratings of 55, 50 & 45 could also result in the same average. The second average might be more trusted because there is more consensus around a particular rating (a lower deviation).
(*In practice, some albums can have several thousand ratings)
This album has a Bayesian average rating of 70.4/100, a mean average of 68.5/100, and a trimmed mean (excluding outliers) of 68.5/100. The standard deviation for this album is 11.8.

This sort of power-alt-rock-new-wave really sets my world ablaze if "done right"; meaning, done in a way i find really groovy. My enthusiasm for this little-known artist reminds me of an album a decade earlier called "logic will break your heart" by the stills. Quite groovy in its rocking licks with uncommitted emotion flowing through catchy lyrics. No one really shares my excitement for that stills album either, especially when i say it out interpol's interpol's "turn out the bright lights". But that's ok. Finding albums like "anna" makes trying new stuff worth it.

The two songs I have heard sound very promising. Might have to get the album in future.

Your feedback for ANNA