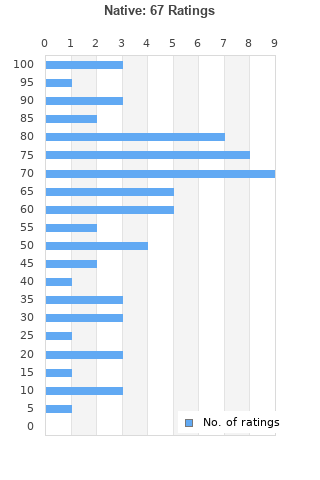 Native is ranked as the best album by OneRepublic. 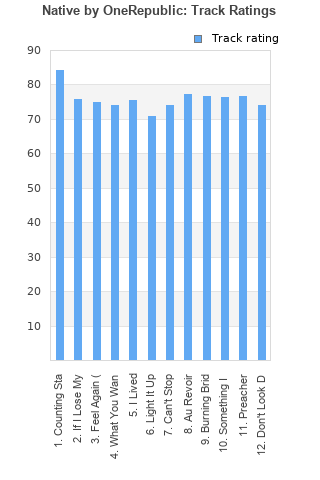 Rating metrics: Outliers can be removed when calculating a mean average to dampen the effects of ratings outside the normal distribution. This figure is provided as the trimmed mean. A high standard deviation can be legitimate, but can sometimes indicate 'gaming' is occurring. Consider a simplified example* of an item receiving ratings of 100, 50, & 0. The mean average rating would be 50. However, ratings of 55, 50 & 45 could also result in the same average. The second average might be more trusted because there is more consensus around a particular rating (a lower deviation).
(*In practice, some albums can have several thousand ratings)
This album has a Bayesian average rating of 61.6/100, a mean average of 59.8/100, and a trimmed mean (excluding outliers) of 59.8/100. The standard deviation for this album is 24.9.

This was actually the first album I bought so I'm kinda nostalgic. I actually think this album is pretty good as a pop album. A bunch of songs are good 'ol radio-ready pop rock hits, but it's a pleasant listebing. "Counting Stars", "Lose Myself", "Can't Stop", "Feel Again", "Burning Bridges" are all solid pop tunes.

They seem to be settling in this pop area that is good, but rarely great, because it just gets cliche. Lots of falsetto. Instrumentals start off strong but get kind of repetitive. Sounds kind of emotionless at times with the low notes.

This album neither disappointed me nor did it surprise me. If you’ve heard OneRepublic once or twice before, then you know exactly what this album sounds like. I will say this: Ryan Tedder has a really good voice, and the man is quite gifted at writing catchy songs, however, there seems to be little to no depth to them. They’re fairly catchy, written-for-radio pop songs and they’re not bad, but there’s nothing too terribly special about them. Look, if you’re a die-hard OneRepublic fan, then you’re probably going to really dig this album, this is no departure for them. However, for me, the album was nothing particularly special, outside of a couple pretty good songs.

They took their best song - "Good Life" - and ran with it for this album.

Native is full of positive affirmations and starry imagery, much like a Jason Mraz-type record. Ryan Tedder has an amazing voice and he doesn't get enough credit as a songwriter. In this feel-good album, OneRepublic shines.

Your feedback for Native