Blur: The Best Of (compilation album) by Blur 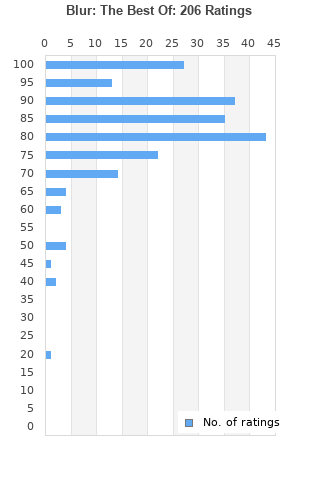 Blur: The Best Of is ranked 9th best out of 21 albums by Blur on BestEverAlbums.com.

The best album by Blur is Parklife which is ranked number 211 in the list of all-time albums with a total rank score of 8,530. 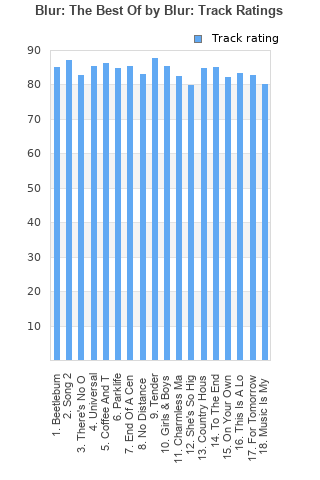 Blur: The Best Of rankings

Blur: The Best Of collection

Blur: The Best Of ratings

Rating metrics: Outliers can be removed when calculating a mean average to dampen the effects of ratings outside the normal distribution. This figure is provided as the trimmed mean. A high standard deviation can be legitimate, but can sometimes indicate 'gaming' is occurring. Consider a simplified example* of an item receiving ratings of 100, 50, & 0. The mean average rating would be 50. However, ratings of 55, 50 & 45 could also result in the same average. The second average might be more trusted because there is more consensus around a particular rating (a lower deviation).
(*In practice, some albums can have several thousand ratings)
This album is rated in the top 1% of all albums on BestEverAlbums.com. This album has a Bayesian average rating of 83.2/100, a mean average of 82.7/100, and a trimmed mean (excluding outliers) of 83.7/100. The standard deviation for this album is 13.0.

Blur: The Best Of favourites

Blur: The Best Of comments

Good album to get if Blur are a band you don't mind but aren't willing to give any studio albums a go. Full of great songs. Enjoyable listen

They were an awesome band!

For a band largely known for their singles, this is a great album to get if you're a Blur fan, or if you like Blur but not enough to buy their full albums.
Best tracks: Song 2, Coffee and TV, Tender
Worst track: Charmless Man

Great singles, worth having!

The whole bunch of Blur's hits. It's good to listen to it from time to time :)

Your feedback for Blur: The Best Of