The best album credited to Radiohead is OK Computer which is ranked number 1 in the overall greatest album chart with a total rank score of 89,803.

Radiohead is ranked number 2 in the overall artist rankings with a total rank score of 298,770.

12
(from the album In Rainbows)
Show more
N.B. Tracks must have received at least 3 ratings to appear in the above list. 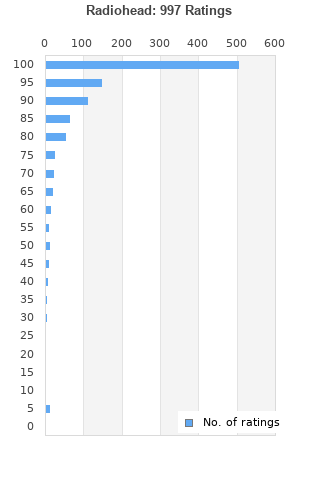 Rating metrics: Outliers can be removed when calculating a mean average to dampen the effects of ratings outside the normal distribution. This figure is provided as the trimmed mean. A high standard deviation can be legitimate, but can sometimes indicate 'gaming' is occurring. Consider a simplified example* of an item receiving ratings of 100, 50, & 0. The mean average rating would be 50. However, ratings of 55, 50 & 45 could also result in the same average. The second average might be more trusted because there is more consensus around a particular rating (a lower deviation).
(*In practice, some artists can have several thousand ratings)
This artist is rated in the top 1% of all artists on BestEverAlbums.com. This artist has a Bayesian average rating of 92.2/100, a mean average of 90.8/100, and a trimmed mean (excluding outliers) of 92.3/100. The standard deviation for this artist is 15.7.

One of the greatest bands of all time!

Radiohead is the best band in 21st century. No one of.

Probably the best band since Pink Floyd were in their prime I reckon, the triology of albums consisting of the Bends, OK Computer and Kid A is up there with the best three album runs in history and the group have also maintained a level of consistency in the quality of their work which is quite phenominal considering how long they have been around for now

Radiohead is the best band ever. It changed my life. All my friends bully me but they listen to shit like 100 gecs. Thom yorke I love you

Best band of all time in my opinion. Even their weakest albums are better than 99% of the material other artists put out. So much variety in their music. Can't wait for their next album which I'm sure will be another excellent piece of work.

One of the most important connections I've ever made in my life.