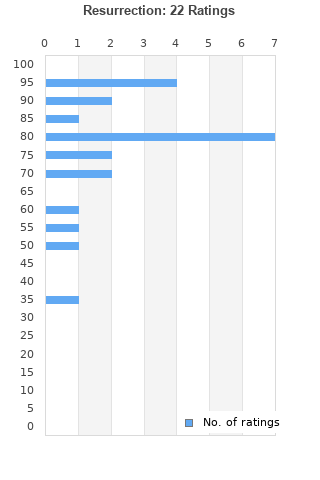 Resurrection World Tour [Region 2] by Halford
Condition: Brand New
Time left: 23h 26m 57s
Ships to: Worldwide
$34.61
Go to store
Product prices and availability are accurate as of the date indicated and are subject to change. Any price and availability information displayed on the linked website at the time of purchase will apply to the purchase of this product.  See full search results on eBay

Resurrection is ranked as the best album by Halford. 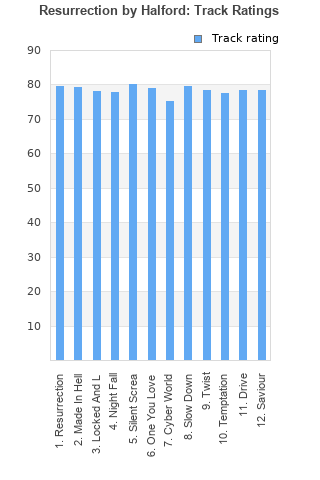 Rating metrics: Outliers can be removed when calculating a mean average to dampen the effects of ratings outside the normal distribution. This figure is provided as the trimmed mean. A high standard deviation can be legitimate, but can sometimes indicate 'gaming' is occurring. Consider a simplified example* of an item receiving ratings of 100, 50, & 0. The mean average rating would be 50. However, ratings of 55, 50 & 45 could also result in the same average. The second average might be more trusted because there is more consensus around a particular rating (a lower deviation).
(*In practice, some albums can have several thousand ratings)
This album is rated in the top 5% of all albums on BestEverAlbums.com. This album has a Bayesian average rating of 77.1/100, a mean average of 79.0/100, and a trimmed mean (excluding outliers) of 79.0/100. The standard deviation for this album is 12.8.

For some reason I didn't love this album when it came out, and I have no recollection why. Ten years with no Priest, you'd think I'd be starved for this kind of album. And Halford's debut was 98% Priest - add Glenn and KK to this album and it would fit right in the Priest canon.

There are three outstanding songs on this one, first, the back to back leadoff autobiographical tracks of Resurrection and Made in Hell. I love the lines on Resurrection "I walked alone into a Fight, no longer standing in Satanic light, I tried to look 2wo far ahead, and saw the light look to my past instead..." Love it. Then Made in Hell goes further back in time to '68 when young Rob first heard the sounds of metal in industrial England. "Silent Screams" being the third key track here, a song that really should be on a Judas Priest album.

Your feedback for Resurrection