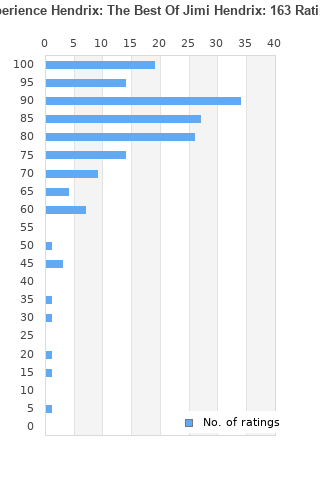 The best album by The Jimi Hendrix Experience is Are You Experienced which is ranked number 40 in the list of all-time albums with a total rank score of 27,257.

Listen to Experience Hendrix: The Best Of Jimi Hendrix on YouTube 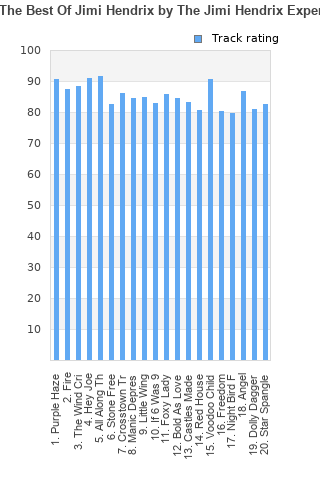 All Along The Watchtower
Rating: 92 (167 votes)Comments:

Rating metrics: Outliers can be removed when calculating a mean average to dampen the effects of ratings outside the normal distribution. This figure is provided as the trimmed mean. A high standard deviation can be legitimate, but can sometimes indicate 'gaming' is occurring. Consider a simplified example* of an item receiving ratings of 100, 50, & 0. The mean average rating would be 50. However, ratings of 55, 50 & 45 could also result in the same average. The second average might be more trusted because there is more consensus around a particular rating (a lower deviation).
(*In practice, some albums can have several thousand ratings)
This album is rated in the top 1% of all albums on BestEverAlbums.com. This album has a Bayesian average rating of 82.7/100, a mean average of 81.7/100, and a trimmed mean (excluding outliers) of 83.3/100. The standard deviation for this album is 16.0.

They did a good job with this comp. I think it would be a good starting point for anybody new to Hendrix.

Great compilation. Hard to condense only so many songs into one album from a library that could of easily filled another whole album of epic tracks. But what's on this is well deserved. An essential for those who can't be bothered with the studio albums

It has all the best songs by the man, who most people consider the greatest rock guitarist of all. Can’t go wrong with this collection.

As about as good as it gets for a single CD Hendrix collection. Would have preferred, Burning of the midnight lamp, instead of, Star spangled banner, although it's probably thought of as more 'essential'. Anyway, one things for certain, this won't be the last Hendrix compilation.

Great songs. Songs arranged quasi-chronologically, with no real thought to flow of album. Songs a great enough to overcome this oversight.

Nice compilation of his greatest songs but I rather just listen to the albums individually.

Your feedback for Experience Hendrix: The Best Of Jimi Hendrix