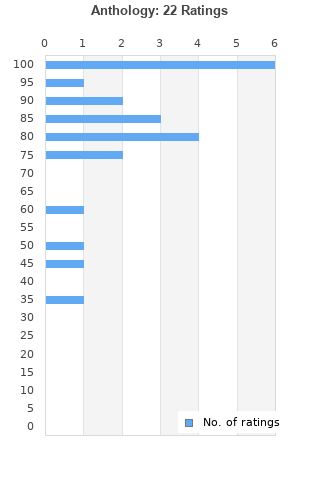 Anthology is ranked 10th best out of 43 albums by Chuck Berry on BestEverAlbums.com.

The best album by Chuck Berry is Chuck Berry Is On Top which is ranked number 596 in the list of all-time albums with a total rank score of 3,105. 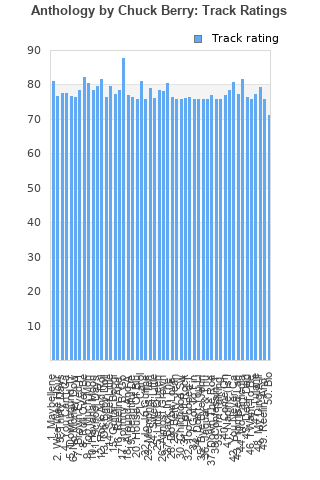 Rating metrics: Outliers can be removed when calculating a mean average to dampen the effects of ratings outside the normal distribution. This figure is provided as the trimmed mean. A high standard deviation can be legitimate, but can sometimes indicate 'gaming' is occurring. Consider a simplified example* of an item receiving ratings of 100, 50, & 0. The mean average rating would be 50. However, ratings of 55, 50 & 45 could also result in the same average. The second average might be more trusted because there is more consensus around a particular rating (a lower deviation).
(*In practice, some albums can have several thousand ratings)
This album is rated in the top 2% of all albums on BestEverAlbums.com. This album has a Bayesian average rating of 78.7/100, a mean average of 81.4/100, and a trimmed mean (excluding outliers) of 81.4/100. The standard deviation for this album is 18.4.

Some credit Elvis, Little Richard, or Jerry Lee Lewis as the fathers of rock n' roll but I give the majority of credit to Chuck Berry. He practically patented how the genre would be played. Not only did he create the riffs, rhythms, and solos for guitar playing but he wrote practically every song on this compilation. He is the godfather of rock. His influence is strong among the Beatles & Stones who are the champions of rock n' roll. This is the kitchen sink compilation for Chuck Berry & it comes at a good price.

Your feedback for Anthology