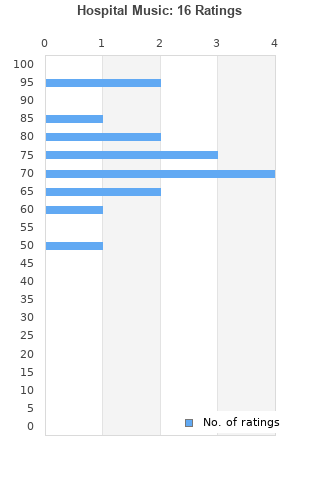 FREE US SHIP. on ANY 3+ CDs! ~Used,Very Good CD Good, Matthew: Hospital Music
Condition: Very Good
Time left: 7d 22h 25m 9s
Ships to: Worldwide
$6.95
Go to store
Product prices and availability are accurate as of the date indicated and are subject to change. Any price and availability information displayed on the linked website at the time of purchase will apply to the purchase of this product.  See full search results on eBay

Hospital Music is ranked 2nd best out of 17 albums by Matthew Good on BestEverAlbums.com.

The best album by Matthew Good is Avalanche which is ranked number 6650 in the list of all-time albums with a total rank score of 186. 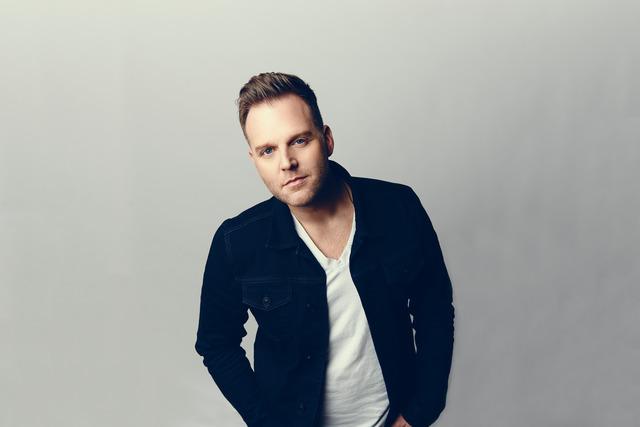 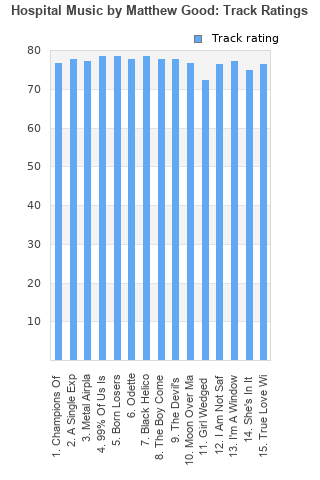 Rating metrics: Outliers can be removed when calculating a mean average to dampen the effects of ratings outside the normal distribution. This figure is provided as the trimmed mean. A high standard deviation can be legitimate, but can sometimes indicate 'gaming' is occurring. Consider a simplified example* of an item receiving ratings of 100, 50, & 0. The mean average rating would be 50. However, ratings of 55, 50 & 45 could also result in the same average. The second average might be more trusted because there is more consensus around a particular rating (a lower deviation).
(*In practice, some albums can have several thousand ratings)
This album has a Bayesian average rating of 73.6/100, a mean average of 73.8/100, and a trimmed mean (excluding outliers) of 73.8/100. The standard deviation for this album is 11.1.

The lyrics are pretty much the best Matt Good's ever done; it's tough not to be affected when you know the context of his life at this time (failed relationship, mental illness, addiction & suicide attempt). However, what keeps this from being a classic is the fact that the music is the same as the previous few Matt Good releases. It's good, but this could have been amazing.

Much-maligned, under-appreciated, contentious, yet loved by many, Matthew Good, one of many proverbial tortured geniuses in rock history, hit new heights with this record. It combines raw emotion with well-placed social commentary. A bad divorce, bipolar disorder, an unnecessary war and cancer in the family of a close friend all combined to inspire a wide variety of epic songs. I know I'm in a very, very small minority (even among his fans) when I say this but this is the finest moment in the career of a very talented singer songwriter. I absolutely stand by my assertion that this is one of the best music albums ever. I wish more people were on board with me that track-for-track this is an extremely solid album punctuated often by absolute brilliance....
Years later, I still think this is a work of genius. For all the genius of Black Helicopter, Born Losers and I'm A Window, etc., the real standouts are the understated songwriting, beautiful singing expansions on Odette, Single Spark Explosion and 99%. Such a great album!

Your feedback for Hospital Music